The twin blasts on US embassies in Nairobi and Dar es Salaam killed 224 people and wounded more than 4,500.

• During the 24th anniversary, there was little to no activities around the commemoration of the invents that left a dark memory on Kenya's history.

• Other than the new US ambassador to Kenya who laid a wreath at the memorial park in Nairobi, the bevy of activities that have marked previous anniversaries were missing. 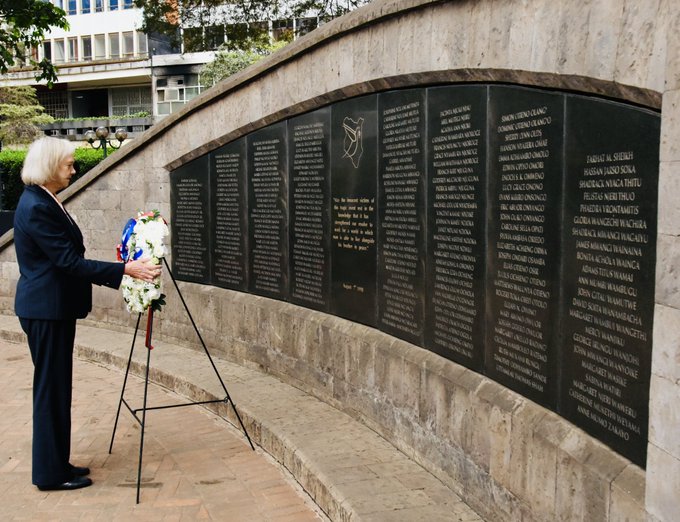 US ambassador to Kenya Margaret Whitman lays a wreath at the 1998 memorial park in Nairobi, August 7, 2022.
Image: US EMBASSY/TWITTER

More than 200 people were killed when suicide bombers drove an explosive-laden truck into the United States embassies in Kenya and Tanzania.

The attacks happened almost simultaneously in the US Embassy in Nairobi and in Dar es Salaam.

During the 24th anniversary, there was little to no activity around the commemoration of the events that left a dark memory on Kenya's history.

Other than the new US ambassador to Kenya who laid a wreath at the memorial park in Nairobi, the bevy of activities that have highlighted previous anniversaries were missing.

"Today marks the 24th anniversary of the terrorist attacks of August 7, 1998. This morning I visited the August 7 Memorial Park to pay my respects to the victims we lost on that tragic day. May peace prevail," Ambassador Margret Whitman said.

During previous anniversaries, activists, families of victims and survivors of the beastly attack would grace the memorial park, mostly to lament about the pain they have endured over the years.

But this year, there was no activity, not even a single government official made a mention of the day. Deafening silence ruled supreme.

Victims have never been compensated to date.

The twin blasts killed 224 people and wounded more than 4,500. Among the dead were 12 Americans.

Osama, the then leader of the al-Qaeda, was killed on May 2, 2011 after a ten year chase by US forces.

This was after he masterminded the September 11, 2001 attacks in New York.

The September 11 attacks, commonly known as 9/11, were a series of four coordinated suicide terrorist attacks carried out by the militant Islamic extremist group al-Qaeda under Osama's directive.

In the attack, 19 militants hijacked four passenger planes and flew two of them into the twin towers of the World Trade Center in New York City.

A third plane hit the Pentagon in Virginia, just outside Washington D.C. while the fourth plane crashed in a field in Shanksville, Pennsylvania.

Raila thanked Kenyans for their resilience towards the fight against terrorists.
News
2 years ago