Uhuru admitted to the Kumi-Kumi pact between him and Ruto.

•Uhuru has hit out at the DP accusing him of being a liar and urging the elecorate not to vote for him.

•According to Uhuru, his deputy is not a trustworthy leader and cannot be entrusted with the nation’s future and he was driven by selfish needs. 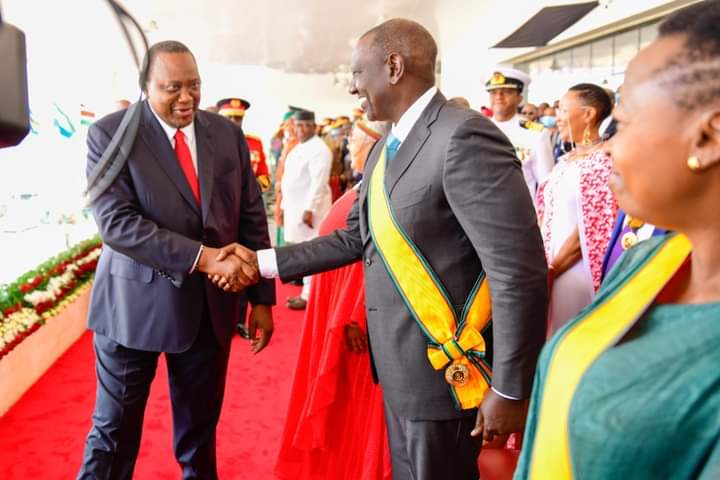 President Uhuru Kenyatta on Saturday made a last call to Mt Kenya residents and cautioned them against voting for his deputy , William Ruto.

“I want to urge you that do not be cheated by Ruto’s eloquence. I have worked with him and has found that he is a person who is untrustworthy and of bad temper, he is not thus fit to lead this nation, ” he said

Speaking in the Kikuyu language while in Nyeri, he told the people from the region not 'to make the mistake of electing Ruto.”

According to Uhuru, his deputy is not a trustworthy leader and cannot be entrusted with the nation’s future and he was driven by selfish needs.

As a result, the president said he had to abandon Ruto and that is what lead him to seek assistance from Azimio la Umoja Coalition presidential candidate Raila Odinga.

“When I realized that Ruto is not a trustworthy person, I went for Odinga and since then, this country has been peaceful. That is why I am asking you to elect Odinga and Karua am driven by need for a peaceful and prosperous nation, ” Uhuru added.

He related the happenings with an analogy of a person who goes to bathe in a river, but a mad man picks up his clothes and instead of being patient he goes chasing after the mad man.

Uhuru admitted to the Kumi-Kumin pact between him and Ruto but said due to the revelation of his deputy's selfish driven needs, he had to abort.

As a result, the president said after choosing Raila, Ruto panicked and started his early campaigns creating an early campaign mood which should not have been the case.

“When I said “kumi kwangu kumi Kwa William ” I did not say this for my sake but for the nation the reason why I reneged on my commitment was due to the realization that Ruto’s presidency would be a setback to this nation” Uhuru added.

The president's activities during his last days in office are in contrast with the late former President Daniel Moi who months before his exist in 2002 spent time seeking reconciliation after extensively campaigning for Uhuru.

Moi publicly asked for forgiveness from all those he may have wronged and forgave those who had offended him.

Uhuru has, however, chosen to use his last days in office to drum up support for Azimio presidential candidate Raila Odinga and commission mega projects which define his legacy.

This even as the rift between him and Deputy President William Ruto widens, days to the August 9 general elections.

Uhuru has hit out at the DP accusing him of being a liar and urging the elecorate not to vote for him.

He said he has the capacity to take the country forward from where Uhuru left.
News
3 months ago