They will hold their final stretch at Nyayo and Kasarani stadium.

•This will be the fifth time Raila is attempting to run for presidency while it will be Ruto’s first attempt.

•Ruto has however served as the Deputy President twice in 2013 and 2017 alongside President Uhuru Kenyatta . 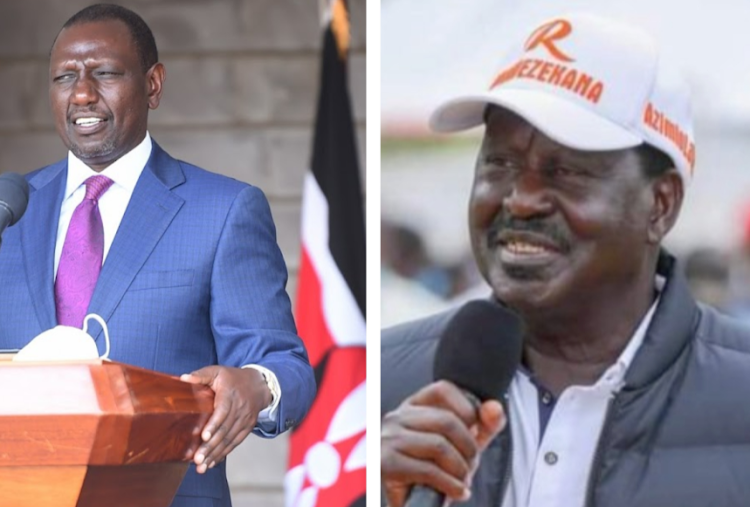 After months of frenzied campaigns, curtains finally fall today with the last campaigns.

This will mark the end of 2022 campaigns as stipulated in the IEBC regulations with politicians making the last minute appeal to the public, ahead of Tuesday General Election.

It will be a busy day for all political players allied to different parties in the country as they pitched tents in the 47 counties.

Ruto will hold his rally in Nyayo Stadium  while Raila will be at Kasarani stadium.

But Ruto is expected to have last rallies at Narok, Naivasha, Nairobi before finalising his campaigns in Kiambu.

The two have unveiled their manifestos to Kenyans with promises of health, Education among other goodies if elected.

Raila launched his manifesto on June 6, detailing his plan for the first 100 days in office if his camp wins in next week’s polls.

He launched the 10-point manifesto at the Nyayo stadium, flanked by his running mate, Martha Karua and hundreds of his supporters and political allies.

This will be the fifth time Raila is attempting to run for presidency.

On the other hand, Ruto unveiled his seven point manifesto at Kasarani stadium to transform Kenya.

Ruto has served as the Deputy President twice in 2013 and 2017 alongside President Uhuru Kenyatta .

Both want to succeed Uhuru , who has fallen out with Ruto and instead supported and urged Kenyans to vote for Raila.

These are the stories making the headlines in the Star.
News
5 days ago

60 hours of make-or-break for Raila, Ruto

Official campaigns ends on Saturday this week being 48 hours to polls.
News
1 week ago

All set for Raila's final rally at Kasarani, Junet says

"It is the day that we shall complete the journey that we started a long time ago."
News
5 days ago
WATCH: The latest videos from the Star
by MAUREEN KINYANJUI News Reporter
News
06 August 2022 - 08:46