May your will be done, Ruto tells God as he closes campaigns

He asked God to give President Uhuru long life.

• He asked God for peaceful elections and for his victory at the polls. 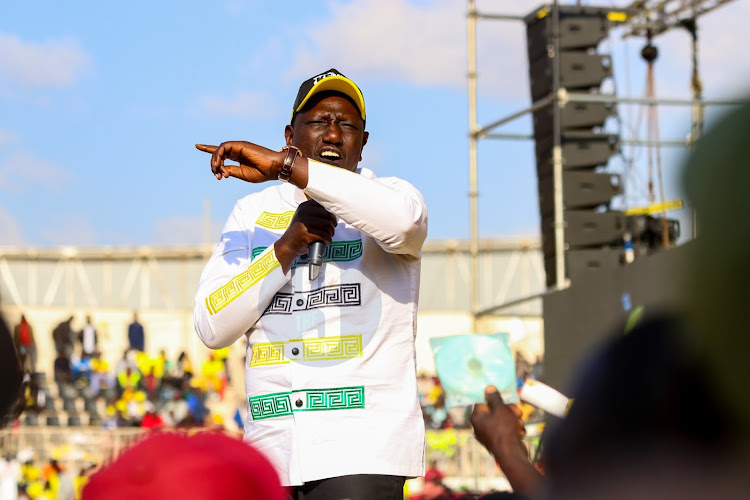 UDA presidential candidate William Ruto closed his campaign marathon with a prayer for God's will to prevail during Tuesday's elections.

"Our God who art in heaven, we are thankful because you have brought us this far, we have finished our campaigns here at Kirigiti," Ruto said in Swahili.

"We are thankful for our country, we come before you, we have an election on Tuesday August 9 next week, we ask that your will be done in our country," Ruto said.

The DP made a last minute dash to Wilson airport to fly to Kiambu in a bid to beat the 6 pm deadline when all campaigns are supposed to be over as per the election laws.

"Candidates and political parties must desist from engaging in any acts of political campaigns outside this period as this would amount to a breach of the Electoral Code of Conduct," Chebukati said in a statement shortly after 6pm.

Ruto asked God for peaceful elections and for his victory at the polls.

"Give us victory in this election for your own glory. Thank you for bringing us this far, we pray for all Kenyans, for our families and for the outgoing president, give him long life," Ruto said.

Over 22.2 million voters will on Tuesday throng polling stations to elect the president, governors, senators, women representatives, members of the National Assembly and ward representatives.

It will be the seventh general election since introduction of multiparty democracy in Kenya 30 years ago in 1992 through the repeal of Section 2(a) of the Constitution which abolished the single party democracy.

Rush against time as Ruto runs to catch flight to Kiambu

Ruto went straight to Wilson Airport from Nyayo stadium for a last rally in Kiambu.
News
4 days ago

Ruto spoke when he held a press conference on Saturday.
News
4 days ago
WATCH: The latest videos from the Star
by EMMANUEL WANJALA Radio, Print & Digital Reporter
News
06 August 2022 - 22:07