Voters fear being locked out of polls over delayed IDs delivery 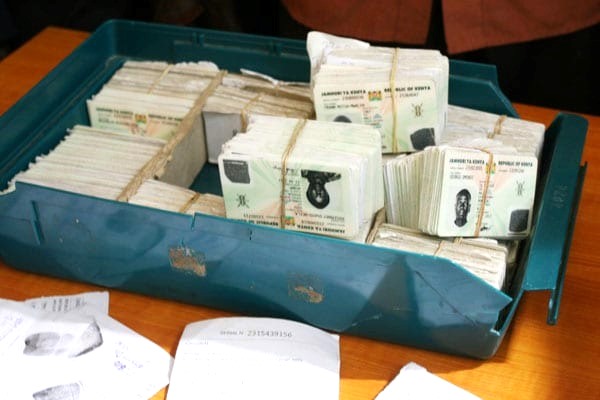 A group of voters in Busia have expressed fears they may be locked out of the August 9 polls for lack of national Identity Cards.

Majority of those who are yet to receive the cards and who spoke to the Star are residents who applied for ID replacement since after losing the  document.

It is mandatory for voters to produce identity cards to be able to vote.

In the absence of ID passports can be used. However, without the two documents, one cannot vote.

In Teso South, an official who works at the subcounty’s National Registration Bureau office said some voters have been visiting the office seeking to collect their ID cards.

They, however, have not managed to pick them because of delayed delivery.

In Teso North, the situation is the same.

Some voters who applied for ID cards as early as May are yet to receive the identification documents.

Attempts by the Star to get the exact number of people who are yet to receive their IDs in Teso North were futile as officers declined to divulge the information.

“If we don’t receive the IDs by Monday, it means they will not vote,” the official said.

“Our boss (Teso North) returned from Kakamega yesterday (Thursday) and managed to bring a few. We hope to receive more in the course of today (Friday). The process has been slow this time.”

The officer said the Teso North subcounty office had received communication from the National Registration Bureau in Nairobi that the remaining batch of identity cards would be dispatched by Wednesday.

Their office, he however said, is yet to receive the identification documents.

Kenyans will be going to the polls on Tuesday August 9 to elect president, governors, senators, woman representatives, MPs and MCAs.

Mad rush for IDs amid calls for listing deadline extension

Migori IEBC returning officer Charles Mutai said the county had so far registered 26,736 by Sunday against the 110,000 target
Opinion
6 months ago
“WATCH: The latest videos from the Star”
by EMOJONG OSERE Correspondent, Busia
News
05 August 2022 - 23:00