Victory is nigh, Raila tells Coast in anti-Ruto onslaught

•Former Prime Minister assures Kenyans of running a clean government should he take over from President Kenyatta.

•Coast region has a total of 1.96 million votes. 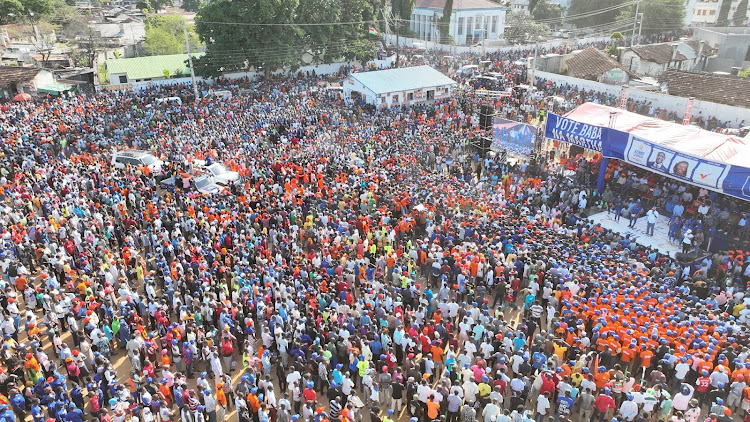 Wooing his Coast stronghold, which the Deputy President is perceived to have made inroads, the former Prime Minister pleaded with the residents not to give up when victory is nigh.

“We have walked 999kms of this journey. We are just a step away from victory,” he said.

Raila, 77, is making a fifth stab at the presidency and faces tight competition from Ruto who has promised to give him a run on August 9.

The Coast region has a total of 1.96 million votes, with Mombasa – a perceived ODM stronghold accounting for over 640,000 votes.

Raila said he has had the plea of Kenyans to ‘free them from poverty, ignorance, disease, and corruption and was ready to wrestle Ruto on the ballot.

“As Azimio, the match we are playing with those fellows from that side of Kenya Kwisha is like never seen before in the republic of Kenya,” the Azimio flag bearer told a charged rally at Tononoka Grounds Mombasa.

The former Prime Minister, who spent a better part of his morning wooing Lamu and Kilifi counties, said the ballot would end the insults that have been hurled at him over the years.

"I am telling that man who is used to insulting me that on August 9, we will lock ourselves into a wrestling match so that we see who wins,” he said.

“Together with his friend [Rigathi Gachagua], we will show them how the government is run. Our government will be clean, serve with justice and end corruption,” Raila said.

The ODM boss added that the vote of August 9, would be about “strangling corruption”.

“We will strangle it at the ballot. It is the time we will say the devil is defeated,” he said.

“We have talked with Kenyans who have told us they are tired of the baggage of bad governance. We want the donkey to be relieved of the load on August 9.”

Karua asked the Coast to trust their side with the task of running government post President Uhuru Kenyatta.

“In this election, one team is made of those who have stood for the rights of Kenyans, the other team has been sent by cartels. Let us please cast our vote for Azimio,” she asked the residents.

The DP candidate, in an apparent swipe at DP Ruto, asked leaders to respectful of those in authority.

“Many come here with insults. If someone is deputy president and you insult the president yet you want to be one, how will you expect to be respected?” Karua asked. “Let us be respectful, if it is about critiquing, do it respectfully and with good reasons. Even so, a school cannot have two headmasters.”

She added, “The only person who can save the economy of the country is Raila Odinga. We have gone round the country and we have seen many have decided the way to go is Azimio. Many have told us that the way is to go is Raila and Martha.”

Karua also asked Coast residents to stand with Raila considering the long time they have supported him.

“I know you have stood with Raila for long. Stand with him this time as he is close. We are promising you that we will fight corruption and your property will be safe,” she said.

Former Gatanga MP Peter Kenneth said that Raila had the command of more than six regions and hence stood a better chance of winning the vote.

“Research has shown that Raila is winning in the first round. Don’t be lied to so that you find yourself outside government. Start getting used to the voice and face of Raila as the fifth president,” Kenneth said.

On Ruto’s remarks at the presser with International pressmen, he said, “You saw that angry man who was here yesterday. He is angry because the seat is gone. His agenda has been to insult Raila and Uhuru.”

Nassir urged Coast residents to turn out in large numbers on August 9 and vote Raila to the last man.

“This election is not about Raila or Nassir but to fulfil the wishes of the people and their desires. After 90 days, this election will be about checking whether we are on track in fulfilling these needs of the people,” he said.

The group only wanted Raila who had sent Joho and Junet to represent him.
News
6 days ago

Raila will get votes in Central due to 'Martha Effect' - Murathe

Karua has been at the forefront of campaigning for Raila in the Central region.
News
4 days ago

Why Kenyans should vote for Raila - Bishop Nduati

He said Raila and Martha are leaders of reputable history and stand on issues affecting the country.
News
5 days ago
WATCH: The latest videos from the Star
by MOSES ODHIAMBO Journalist and Political Writer
News
05 August 2022 - 18:58