Natembeya, 51, resigned on January 13, 2022 after 26 years of public service to focus on his bid for the Trans Nzoia governorship.

• In 2019, after serving  Narok residents for one year and three months,  Natembeya was promoted to the rank of Regional Commissioner (RC). 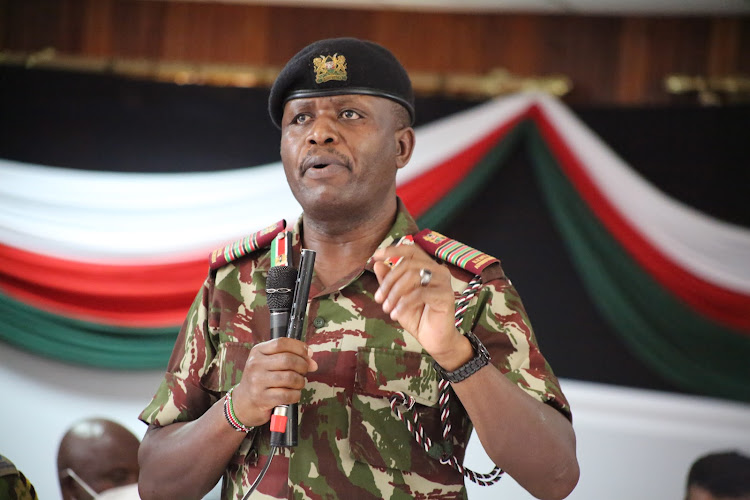 Interior Cabinet Secretary Fred Matiang’i has revealed how his ministry had been under pressure by the Deputy President William Ruto.

Speaking on Friday, the CS claimed that his ministry was once under pressure from Ruto who wanted former Rift Valley Regional Commissioner George Natembeya sacked.

“For the time I have been at the ministry of Interior I can say this publicly, he likes to quote God and God is seeing all of us talking here. The pressure under which we have come before to even sack Natembeya for example,” Matiang’i revealed.

The CS stated that DP Ruto wanted all regional commissioners appointed under his tenure fired without providing reasons to justify the action.

The CS was responding to Ruto’s statement on Thursday, where he accused Rift Valley Regional commissioner Maalim Mohamed of planning chaos on election day.

"The Regional Commissioner of Rift Valley, Maalim Mohamed, the County commissioners Samson Ojwang of Trans Nzoia and Stephen Kihara of Uasin Gishu and Erastus Mbui of Nakuru are part of this scheme. They are the people holding night meetings to plan conflict amongst Kenyans," Ruto said.

However, the Director of Communications, office of the Deputy President, Emmanuel Talam disputed the claims, saying that Matiang'i should stop using his office to do politics.

He said that said that the Interior CS has a clear job description, and fighting the DP is not among his duties.

"Matiangi should stop using his office to do politics. His job is clear. Fighting William Ruto is not one of his responsibilities," Talam told the Star.

Natembeya , 51 resigned on January 13, 2022 after 26 years of public service to focus on his bid for the Trans Nzoia governorship

He was the then Rift Valley RC and was replaced by Makueni County Commissioner, Mohammed Ahmed Maalim.

In 2019, after serving Narok residents for one year and three months,  Natembeya was promoted to the rank of Regional Commissioner (RC).

While in Narok, he quelled the inter-community tension between the Maasai and Kipsigis.

Natembeya oversaw the voluntary mass surrendering of guns by the two communities, and later the evacuation of Kenyans living in the Mau forest.

Between 2005 to 2009, Natembeya worked as the personal assistant to the late Internal Security minister, John Michuki, whom he described as a perfectionist and a disciplinarian.

Consequently, he was promoted to County Commissioner for Murang'a.

He made great strides in restoring and maintaining security in those counties with some of his notable achievements including eradicating the Mungiki in Murang’a.

In the capital, Natembeya worked with the residents of Eastleigh in a bid to flush out al Shabaab and its sympathisers, following sporadic attacks in the area.

He also worked in Isiolo.

Naibei says he quit after the former administrator picked his aunt as his deputy.
Counties
1 month ago