Raila has assured me of Cabinet post - Mwangi wa Iria

Inclusion in Cabinet was among his preconditions prior to joining Azimio on July 19.

• Other than demand for a ministerial post, wa Iria said his one home one cow initiative must be included in the Azimio manifesto. 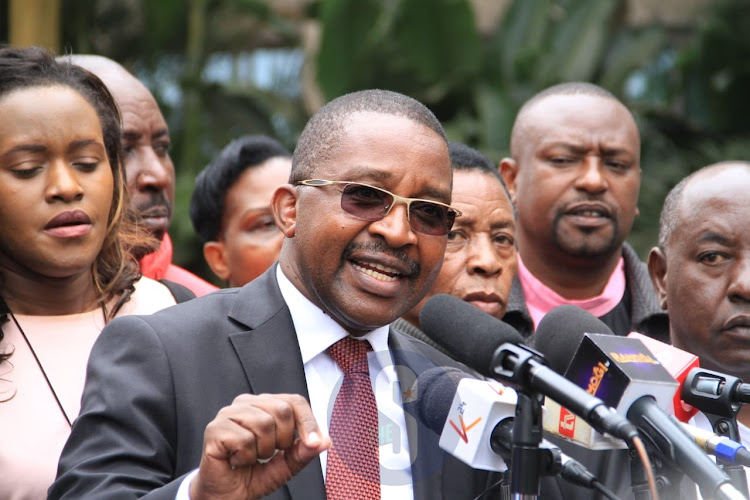 Murang'a governor Mwangi wa Iria now says his inclusion in the Azimio administration should Raila Odinga win the presidency is a done deal.

Inclusion in Cabinet was one of wa Iria's preconditions before he threw his weight behind the ODM leader's presidential bid.

"Raila has now assured me of a ministerial position and I am begging you to vote for me by voting for Raila Odinga," the governor said during a media briefing at Sarova Panafric Hotel, Nairobi.

Other than demand for a ministerial post, wa Iria said his one home one cow initiative must be included in the Azimio manifesto.

The second-term governor said Raila agreed to infuse his Usawa manifesto with the Azimio one.

"I will implement all the programmes because I have the knowledge. The people of Murang'a should therefore rally behind me and we shall demand that Raila gives me a cabinet position," wa Iria said.

"Raila will make sure we are self employed through Wachuuzi and Bodaboda Saccos financing and women empowerment.

His programmes, he said, include the economic empowerment of Kenyans through agricultural programmes to boost the economy.

"Our farmers are safe and will gain from projects like one home one cow, milk processing, avocado farming, dairy farming and others which I had already started as governor,” he said.

Wa Iria called on his supporters to vote for Raila saying that it was him who reached out after 'injustice' was  done to him by the IEBC, locking him out from the presidential race.

"IEBC breached my rights by refusing to give me a listening ear. Raila Odinga stood by me and we talked for over three hours and this is why I decided to join his train," wa Iria said.

I know who blocked my presidential bid, it's not Raila - Wa Iria

He insisted that Raila was the only leader who cared to know what was going on.
Counties
2 weeks ago

The second-term governor revealed that Raila agreed to consider his manifesto.
News
3 weeks ago
WATCH: The latest videos from the Star
by BERTHA OCHOMO
News
05 August 2022 - 12:18