"We believe that the four-wheel drive car was tampered with the previous night.''

•The four met their death on Thursday following a tyre burst that happened in the Bandu area along the Mombasa-Lunga-Lunga highway in Kwale county. 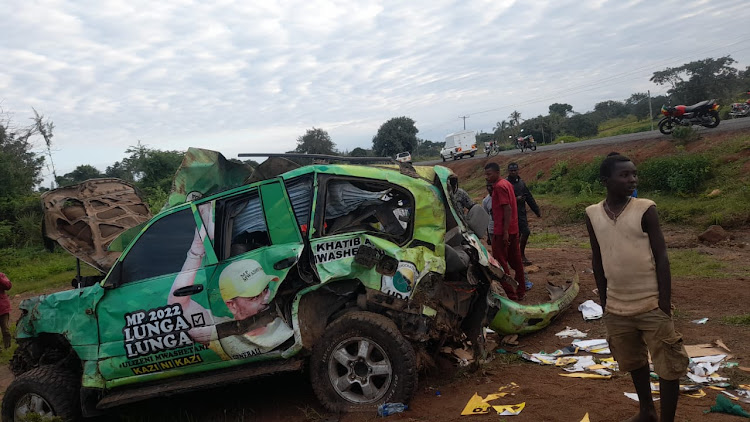 The vehicle that involved in a road accident in Kwale on Thursday, August 4, 2022.
Image: COURTESY

Lunga-Lunga MP Khatib Mwashetani has alleged that the car which was involved in a fatal road accident killing four of his team members was tampered with.

The four met their death on Thursday following a tyre burst that happened in the Bandu area along the Mombasa-Lunga-Lunga highway in Kwale county.

In his Facebook post, the MP joined the family members in mourning the death of his staff.

"With great sorrow, I mourn the death of my team members who succumbed to injuries when they were involved in a fatal road accident along the Mombasa-Lunga-Lunga at Bandu area in Lunga-Lunga sub-county,

"We believe that the four-wheel drive car was tampered with the previous night resulting in the cause of death of Five colleagues," reads the post.

Earlier, the Lunga-Lunga OCPD Peter Mutua Zimbi said the four were heading to Lunga-Lunga from Msambweni.

"It is believed that they were coming from a campaign meeting and were rushing back to Lunga-Lunga," he said.

The Toyota Prado they were travelling in had a right tyre burst and in the process, the driver lost control.

However, preliminary police investigations revealed that the driver was speeding.

The vehicle rolled several times, about 50 meters away from the road.

The Prado had carried five occupants, three were reported to have died on the spot while the fourth succumbed while being rushed to hospital.

The police are yet to give their updates on the number of casualties.

The other two who sustained serious injuries and were rushed to hospital were Siamini Bonzo and Sadiki Ndoro.

The dead bodies were taken to the Msambweni mortuary.

Police have further launched investigations to determine the cause of the accident.

Zimbi cautioned residents and motorists to be careful while driving.

"I would like to tell them to avoid speeding and be keen while using the road," he said.

He also called on residents to observe safety while going for campaigns and voting.

The accident come barely two weeks when 20 people lost their lives in Samburu along the Mombasa-Nairobi highways and one at Kombani on the Mombasa-Lunga-Lunga highway road accidents.