The DPP on Twitter said investigations have been launched

• The incident was discovered by one of the DPP’s sons who had gone downstairs for morning prayers. He discovered the tv was missing.

• Nairobi Regional Police Commander James Mugera who visited the scene said investigations had been launched to establish what happened and how. 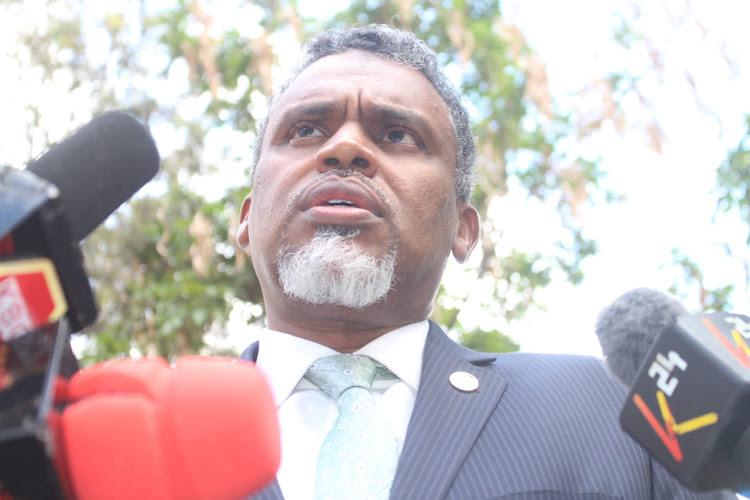 Burglars broke into the Nairobi residence of the Director of Public Prosecutions Noordin Haji and stole electronics.

Haji and his wife were not in the house when the incident happened Friday morning.

The DPP on Twitter said investigations have been launched.

"The DPP would like to clarify that there was a robbery at his residence, not his office, & investigations are ongoing. The ODPP, as a Prosecuting Authority, doesn’t collect or store evidence of any nature. Members of the public & media are urged not to politicise this incident," he said.

The thieves made away with a TV set, a laptop belonging to one of his sons and assorted shoes.

The two armed police officers who man the compound said they did not hear it happen.

The incident was discovered by one of the DPP’s sons, who had gone downstairs for morning prayers, when he discovered their TV was missing.

He told the police that he then realised his laptop that was in the sitting room was also missing and other personal effects.

He called his father and informed him of the same.

Nairobi Regional Police Commander James Mugera who visited the scene said investigations have been launched to establish what happened.

“They broke into the house but it seems no one heard it. We are talking to all workers and security who were present for more information,” he said.

Detectives from crime scene management arrived for procedural dusting and picked up evidence to help them with the probe.

Haji said he was away and had been informed of the same and his family was safe.

The DPP is one of the most protected individuals in the country given his position.

His office is handling dozens of sensitive cases.

DPP says it should be conducted swiftly as impugned materials could sow seeds of discord.
News
1 week ago

The PIR indicated that five staff members in the elections body were involved.
News
1 week ago

The MP is heard allegedly setting up a meeting with IEBC officials.
News
1 week ago
WATCH: The latest videos from the Star
by NANCY AGUTU Deputy Digital Editor
News
05 August 2022 - 11:35