Backlog reduced by half in Land, Environment Court

• He urged more people to use alternative dispute resolution in land and succession issues as it's faster, cheaper and creates less hostility. 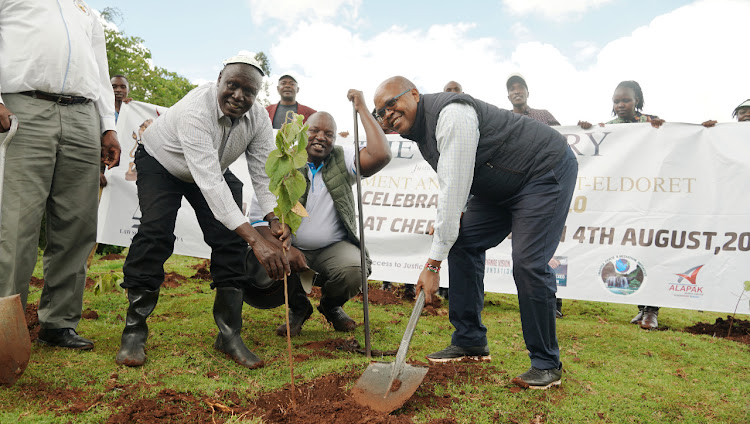 The backlog of land disputes in North Rift has declined from 1,500 to 700, Justice Elijah Obaka of the Eldoret Land and Environment Court has said.

Justice Obaka on Thursday attributed the reduction to emphasis on speedy hearings and determination as well as alternative dispute resolution for land disputes and succession. He said mostly the alternative, out-of-court approach reduced the cases.

He urged family members in disputes to seek alternative dispute resolution for land cases and succession to avoid adverse impacts on family relationships.

"There has been a decline in hundreds of cases related to land disputes in our courts in Eldoret," he said.

"It is also encouraging  affected parties have seen fit to resolve the matter out of court instead of seeking full hearings of their cases," Ombaka said.

The judge was speaking at Chebara dam site in Elgeyo Marakwet where he led judges and magistrates in planting more than 1,000 seedlings to help conserve the environment.

He was accompanied by Eldoret senior resident magistrate Barnabas Kiptoo, managing director of Eldoret Water and Sanitation Company Peter Biwott and representatives from the national and county governments, among others.

The MD said that they have planted 25,000 tree seedlings in water catchment areas in the region to redress degradation of the environment resulting from tree felling by timber and charcoal merchants.

"We are targeting to plant tree seedlings in 177,000 hectares in this rainy season of land in the vast region in partnership with the local community and other stakeholders," the MD said.

Defendants will surrender original title within 10 days for cancellation of their interest.
News
1 month ago

Says court processes tend to be adversarial and make participants have strained relations
News
1 month ago
“WATCH: The latest videos from the Star”
by JESSICAH NYABOKE
News
05 August 2022 - 23:00