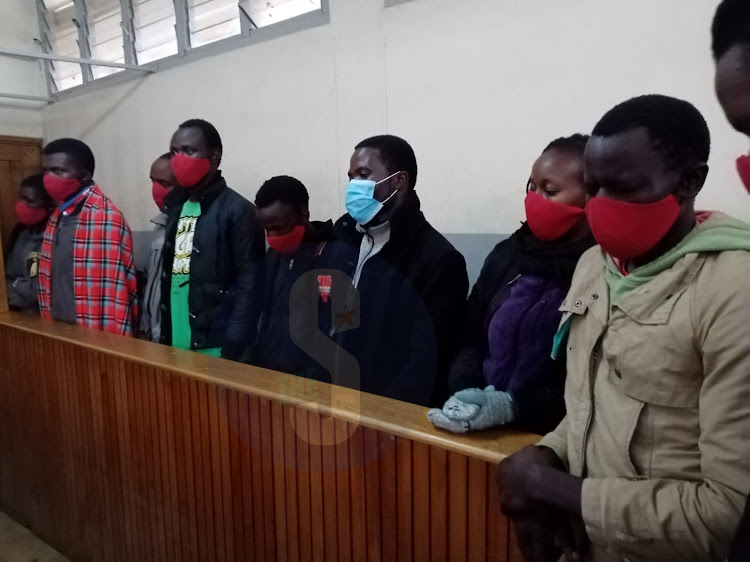 Some of the students before court in Eldoret.

Nine students of Moi University have been charged with the circulation of hate leaflets in parts of Uasin Gishu county.

They all denied the charges at the Eldoret Court when they appeared before Principal Magistrate Onkoba Mogire.

The case will be mentioned on August 22.

State Counsel Anthony Fedha had urged the court to give strict bond terms to the suspects considering the seriousness of the offence.

"We are not opposed to bond terms for the suspects," he said.

All the students had also pleaded with the court to give them favourable bond terms because they are students from poor backgrounds.

In the first count, the students were charged with the publication of false information contrary to section 23 of the computer misuse and cybercrime Act.

"On 29th July 2022 at Moi University in Kesses sub county jointly with others not before the court, by means of a licensed computer system namely mobile device knowingly published information that is false," the charge sheet read.

The prosecution said the words were calculated to cause panic, chaos and violence among citizens of Kenya.

They faced another similar count of publishing false information on the same day.

The students were not represented by any lawyer and were remanded until they pay the bond.

Ruto had alleged the leaflets were printed and distributed by employees of President.
News
3 months ago

It follows the emergence of hate leaflets in parts of the region.
News
3 months ago