"We will win through the votes of the people of Kenya" he added.

• "Saying Uhuru wants to rig elections using chiefs or that there is intimidation towards the IEBC. Hakuna kitu kama hiyo (There is nothing like that)," the ODM leader said.

• He further told the UDA leader that he is competing with him and his running mate Martha Karua. 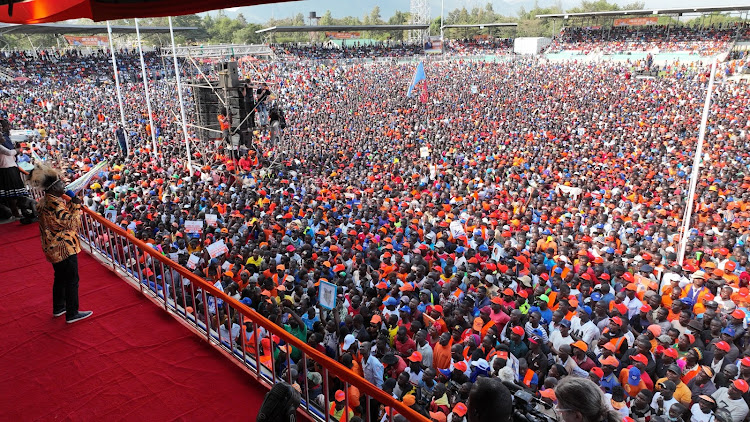 Azimio leader Raila Odinga has hit back at his Kenya Kwanza opponent William Ruto for alleging that the Coalition was using chiefs to sabotage Tuesday's polls.

Speaking in Kisumu where the Coalition held a grand rally on Thursday, Raila defended President Uhuru Kenyatta, who was the subject of the accusations.

"Saying Uhuru wants to rig elections using chiefs or that there is intimidation towards the IEBC. Hakuna kitu kama hiyo (There is nothing like that)," the ODM leader said.

"We do not need chiefs, assistant chiefs or the administration to win this election. We will win through the votes of the people of Kenya."

He expressed his confidence that Kenyans will vote for him.

Raila said Ruto should leave Uhuru alone, acknowledging that he should retire in peace.

He further told the UDA leader that he is competing with him.

"I have told the people who are running against us that Uhuru is the outgoing President of the Republic of Kenya. Leave him alone. Let him go and retire in peace."

"If you have a problem, face Raila Odinga and Martha Karua squarely," he added.

The Ruto-led camp has been accusing the President and Azimio team of using chiefs to rig the polls.

"County  Commissioners, Assistant County Commissioners are being forced with threats and blackmail of losing their jobs if they don't become Azimio operatives," Ruto claimed on Thursday.

He further claimed that there were night meetings held to sabotage him.

"Please Mr President, do not use our chiefs to sabotage the Kenyan election. Because today there are night meetings involving chiefs and other government officials where they are being forced to undermine, manipulate and sabotage the August 9 election," Ruto said on Tuesday, during a rally in Kakamega.

On Tuesday, Interior CS Fred Matiang'i defended his meetings with the security and administration officials.

"Every single national agenda we are pushing, we are working with chiefs... Who else I'm I supposed to meet, if not chiefs and county commissioners," Matiang'i said.

He pointed out that the chiefs and their assistants have been holding Kenya together in the past elections when things almost fell apart.

"We are meeting chiefs because they are our colleagues and that is the work we do. I call chiefs, they call me and they will continue to call me until we leave the offices we are holding."

Ruto on Sunday claimed a plot to use chiefs and assistant chiefs to disrupt elections.
News
2 weeks ago

Ruto calls on government officials and ordinary Kenyans to vote wisely.
News
2 weeks ago
WATCH: The latest videos from the Star
by SHARON MWENDE and DICKENS WASONGA
News
04 August 2022 - 17:51
Read The E-Paper