They are no longer moving around in trucks and heavily protected vehicles.

• They can be seen moving from one house to another at various estates and streets in Naivasha to woo the undecided voters.

• Throughout their campaigns, the issue of peace and large turnout has dominated their speeches, with security increased in and around the town. 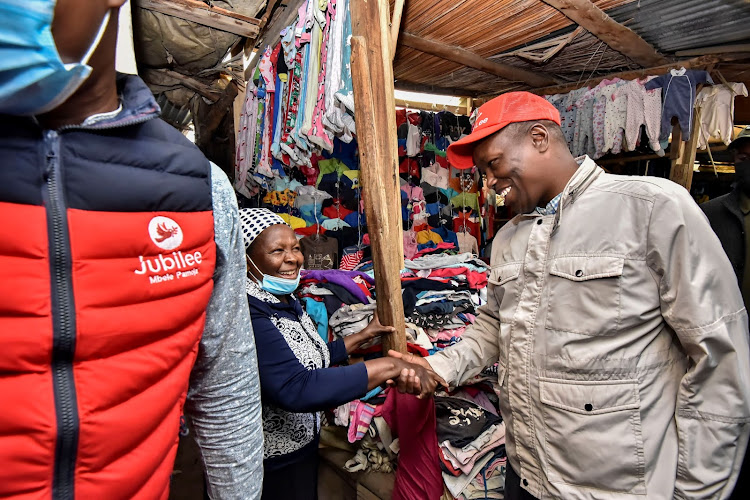 Days to the general election, politicians in Naivasha are now going door-to-door to try and convince voters to support their bids.

They are no longer moving around in trucks and heavily protected vehicles. Instead, they have chosen to have one-on-one interactions with voters.

They can be seen moving from one house to another at various estates and streets in Naivasha to woo the undecided voters in the constituency that has about 157,000 registered voters.

Throughout their campaigns, the issue of peace and large turnout has dominated their speeches, with security increased in and around the town.

Nakuru Governor Lee Kinyanjui said the election will come and go but the country and neighbours would remain.

Speaking when he visited Naivasha town, Karagita, South Lake and Kasarani, he said his development record is a testimony of what he has done in the last five years.

The governor, who is defending his seat on the Jubilee ticket, urged residents and politicians to be tolerant of each other and respect the law.

“All the subcounties have a major hospital coming up, roads have been upgraded and all we are calling for is a second chance to finish these projects,” he said.

UDA senator candidate Tabitha Karanja has also been spotted engaging with voters and urging them to be peaceful during and after the election.

She said she wants to empower the business community and investors who are key to employment and revenue generation.

“For years, the national government has forgotten small-scale businesses and it's time we enacted laws to support their businesses,” she said.

“One message that we as candidates have agreed on is peace as Naivasha is greater than any individual and this exercise will be over in two days,”  Rebo said.

Naivasha subcounty commissioner Mutua Kisilu termed the lakeside town peaceful due to several measures put in place ahead of the election.

He said unlike other electioneering years, no flower farmworker has fled the town.

Kisilu attributed this to peace campaigns and security measures put in place by the state.

“We have engaged flower farmers and workers in various forums and according to the companies, we do not have any worker leaving his workplace this time round,” he said.

Uhuru fires at Ruto, drums up support for Raila in Naivasha

He asked the residents to support Odinga's presidency saying the country will be stable in his hands.
News
3 weeks ago

He focused on the economy, graft and health despite attempts by various leaders to have him address the matter
News
4 weeks ago
“WATCH: The latest videos from the Star”
by GEORGE MURAGE CORRESPONDENT
News
04 August 2022 - 23:00
Read The E-Paper