Abdi was seeking to retain his seat on an independent ticket.

•In a statement to the media, the governor announced he has stepped down in favour of ANC candidate Sheikh Mohamed.

•ANC is a member of the Kenya Kwanza Alliance led by Deputy President William Ruto. 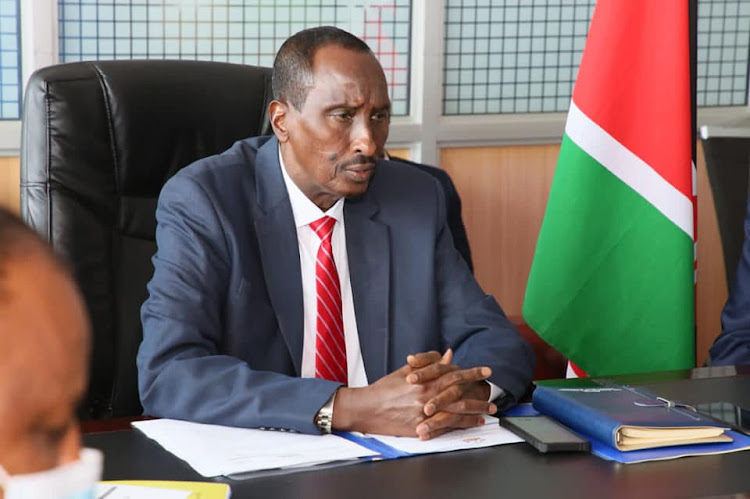 FILE Wajir Governor Mohamed Abdi speaking in his office during the inauguration of the audit committee on Monday, April 11.
Image: STEPHEN ASTARIKO

Wajir governor Mohamed Abdi has quit the race to defend his seat in next week's elections.

In a statement to the media on Wednesday, the governor announced he has stepped down in favour of ANC candidate Ugas Sheikh Mohamed.

ANC party is a member of the Kenya Kwanza Alliance led by Deputy President William Ruto.

“I wish to inform the People of Wajir County and Kenyans at large that after making wide consultations and considering a number of factors, I wish to withdraw from the 2022 Wajir County Gubernatorial race in favour of Ugas Sheikh Mohamed.

At the same time, the governor also announced that he has quit politics for good.

"I wish to express my gratitude to the people of Wajir and Kenyans as a whole for the opportunity to serve them in different capacities for a total of 50 years. It is my sincere hope that my legacy will be improved by the present and future leaders."

Sources privy to his withdrawal told the Star in confidence that Abdi arrived at the decision several weeks ago after realizing that he stood a slim chance of retaining the seat.

“It was just a matter of time before he made the announcement public.  He knew that chances of winning were extremely slim considering that his clan [Fai] of Dogodia has fronted four candidates," he said.

In terms of clan arithmetic, Fai which Abdi hails from is the largest sub-clan of the Degodia.

Other candidates from the clan who are contesting are Hassan Mohamed, Jubilee, Mohamed Elmi, independent] and Ugaas.

According to the source, Abdi’s support for Ugas did not come as a surprise since, in 2017, he stepped down in favour of Abdi.

Since he took over in 2017, Abdi has faced numerous challenges among them accusations of corruption which was among the reasons that led to his impeachment in 2019 at the county assembly and later Senate.

Mureithi is seeking to oust the incumbent MP Babu Owino.
News
5 months ago