The group is accused of being behind a string of murders in the region.

• His arrest comes two weeks after police shot and killed four suspected members of the gang.

• Over 140 members of the group have been arrested to date since the crackdown was ordered by Interior CS Fred Matiang'i late June. 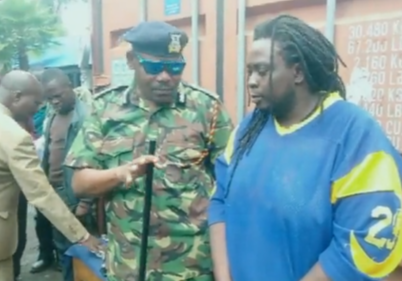 The ringleader of the ragtag 'Confirm gang' has been arrested in Nakuru.

Dickson Macharia Waithera alias Deco was apprehended by officers in a multi-agency operation on Wednesday.

The group is suspected of being behind a string of crimes and murders in Nakuru.

A crackdown against gang members of the dreaded group was intensified over two months ago following the murder of six women.

Two weeks ago, four suspected members of the killer gang were gunned down by police at Barut, Nakuru West.

Their killing game days after two people were beheaded in the area by suspected members of the notorious Confirm gang.

Nakuru police commander Peter Mwanzo said the suspects were shot after some young men were spotted waylaying people on the roadside.

"The men tried to attack the uninformed officers. The police fired in the air but the men tried attacking the officers, while they (gang) raised an alarm calling for reinforcement from other gang members,” Mwanzo said.

The police boss who led Deco's arrest on Wednesday said then that criminal gangs including one known as Nyuki had relocated to the villages after intensified police crackdowns against their members.

Over 140 members of the group have been arrested to date since the crackdown was ordered by Interior CS Fred Matiang'i late June.

They defied orders to surrender and tried to attack police with machetes and arrows.
News
6 months ago