Uhuru to Mt Kenya: Ruto is evil, elect him at your own peril

President claims the DP is corrupt and thrives on lies 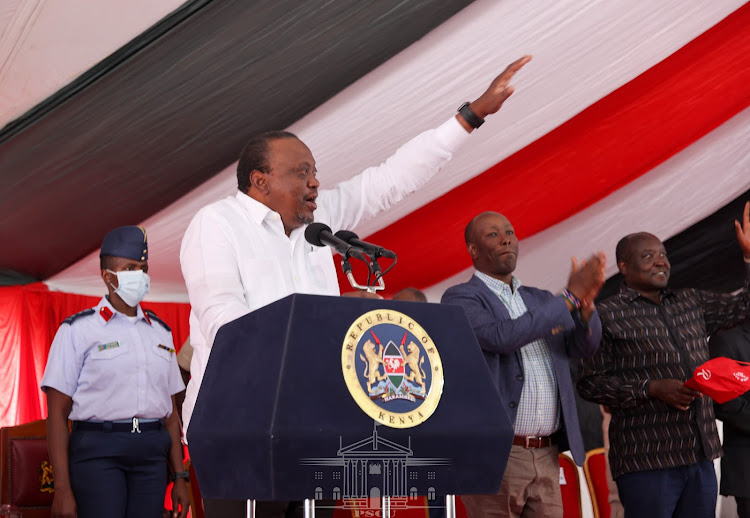 President Uhuru Kenyatta on Monday fired yet another scathing salvo at his deputy, William Ruto, terming him an "evil and a thief" and warning his Mt Kenya backyard against electing him.

Speaking in the Kikuyu language in his Kiambu home turf, Uhuru warned the region that they will live to regret it, if they elect him next week.

“You people from Mt Kenya region, if you elect Ruto, you will cry one day because the man is very evil,” Uhuru said in yet another bare-knuckle attack on Ruto.

Uhuru rooted for Azimio presidential candidate Raila Odinga, describing him as an experienced old man who will deliver for them.

"I am supporting him because he is a good man and has been listening to me whenever there is an issue. He supported BBI that meant well to our people," he said.

The President spoke when he issued more than 14,000 title deeds to the residents at Kamangu Primary School grounds in Kikuyu.

Uhuru termed the DP and his Kenya Kwanza brigade as evil people following remarks by some leaders that he was planning to kill them.

“I hear some saying I want to kill them. Tell them I don't have any business doing that. All those years they have been abusing me while on top of cars, have you heard me respond to them? Now that I am heading to Icaweri is the time I will think of killing them?,” he asked.

He added, “Someone who is led by the demon speaks what is in their mind and what they would do were they in power”.

Last week, Ruto claimed that the President had started threatening him and asked him not to "kill my children".

“With a lot of respect be a decent human being, we are the ones who helped you so stop pretending now, you have started threatening me but as long as you don't kill my children, let us respect each other.”

“The reason I am saying my life is in danger is that some people have been following me, a recent case being in Nakuru. But I am not afraid, I am ready to pay the ultimate price," Rigathi said while on a campaign trail in Nyeri county.

But the President told them off, saying the DP is a selfish leader whose agenda is power and control of the people.

“Let him continue attacking me. I just have a few days in office but I have enough reason of supporting former Prime Minister Raila Odinga who accepted my call to run the government after Ruto engaged in politics."

The President indirectly referred to the DP as a thief and corrupt person who cannot be trusted with the leadership of the country.

“...but I advise you to choose the path of solid and experienced people…”

“Even if we have been with them, some of them, if you live with someone and they steal every morning, don't you reach a point and say enough is enough? Let’s go separate ways?” Uhuru posed.

He said Ruto thrives on lies hoodwinking the masses to elect him  and warned the region to be cautious.

“If you stand there and lie to people that we want to change the constitution so that Uhuru can add himself more years. How many more days do I have? Are they even 10?”

“Have you heard me say anywhere I don't want to go home? I am only praying to God that the remaining days go faster and go stay with my grandkids.”

Uhuru told the region that Raila is the best bet for them, unlike Ruto who thrives on lies.

“There is an old man called Raila. I am supporting him because when we spoke and I asked him 'What is your problem? Because I don't want violence and I want to know what makes us fight.”

“If we would know the cause of this fight and how we can stop it, can't we live in peace?

“Now, if we agree we have more seats because we have many tribes and they have positions, was it a bad negotiation?” he posed.

Raila and Martha, he expressed confidence, will fight injustices across the country and ensure job opportunities for the youths.

“I am ready to go home and retire peacefully and I want to leave you and the leadership of Raila and Martha,” he said.

He called on the youths not to be short-sighted and look ahead into the future.

The President defended his last-minute rush to commission and launch projects saying that it was his duty to work for Kenyans as that was what he was elected to do.

“I have been doing that work. There are more people who would have helped me to do that work but they opted to walk around hurling insults,” he said.

Besides the issuance of the title deeds, President commissioned the Sh24 billion Karimenu II dam in Gatundu North.

Last evening, Uhuru flew to Kisumu  where he will commission several projects in the large Western region.

He says his deputy should concentrate on his campaigns instead of crying foul his life is in danger.
News
6 months ago