• IEBC chairman Wafula Chebukati says claims by some politicians that some IEBC staff had met with Kenya Kwanza officials have led to profiling.

• Says some of his colleagues are now being linked to political affiliations. 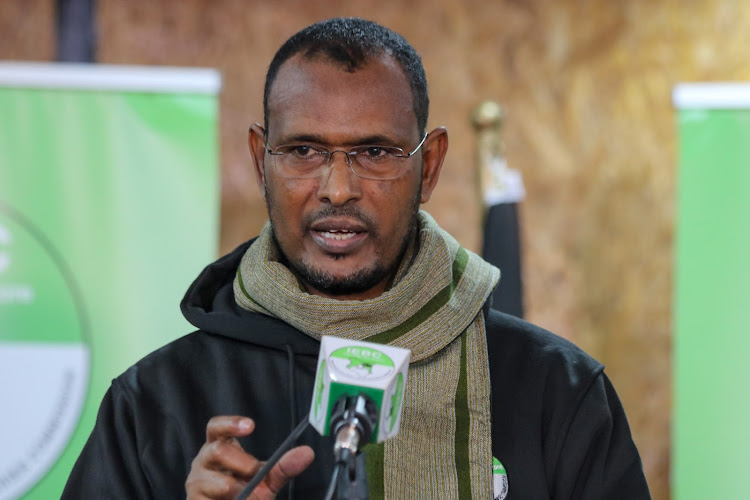 The security of senior electoral commission officials has been increased as the country gears up for the polls next Tuesday.

IEBC commissioner Abdi Guliye on Tuesday said all officials overseeing the elections have been guaranteed of their safety during and after the elections.

“Nobody has shown interest in harming us but we have taken measures to improve our security. All commissioners have received additional security. All the 290 returning officers are also provided with security,” Guliye told a press briefing at the Bomas of Kenya.

“We know tempers can flare and officials could end up being attacked.”

He was accompanied by commissioner Francis Wanderi.

Guliye said no security incident has been reported so far.

“We are safe for now. We do not know about tomorrow but every measure has been taken to ensure our safety,” he said.

He was responding to a question on whether staffers at the commission are worried about their safety, given that a  senior technology manager, was found murdered around the same time in the 2017 elections.

Chris Msando died on July 28 after an abduction.

Msando's body was found in Kikuyu alongside that of a 21-year-old woman. Both had been stripped naked.

Speaking during a media interview on July 13, IEBC chairman Wafula Chebukati said claims by some politicians that some IEBC officials had met with Kenya Kwanza officials had led to the profiling.

He said some of his colleagues are now being linked to political affiliations.

“If you look at our staff in the commission, especially in ICT, they are now frightened because their photos are now all over the media,” Chebukati said.

Guliye said that two toll-free numbers (1543 and 1544) have been established, where voters could get information they need or clarifications.

He said the dispatch of election materials is ongoing with no reported incidents so far.

“Some materials have already arrived in the counties to be dispatched to the constituencies later on,” he said.

He reminded voters that they will be required to produce documents they used to register as voters for them to be allowed to vote.

Wanderi said those who are not on the register will not be allowed to vote.

“We did voter verification and it was during this period that Kenyans were required to raise concerns, if they had problems with their details. If you did not raise any questions then, too late. There is nothing we can do. Just wait for 2027,” he said.

All institutions well prepared, differences among personalities and institutions ironed out, says Haji
News
6 months ago

Cast no doubts on IEBC’s credibility, peace actors to Kenyans