Gachagua: How strange people tried to access my room in Nakuru

•Gachagua could not explain how the same hotel that denied the people access to the room could allow the group to walk in the corridors.

•The remarks sparked a war of words with Ruto leading his team in a combative attack on the President. 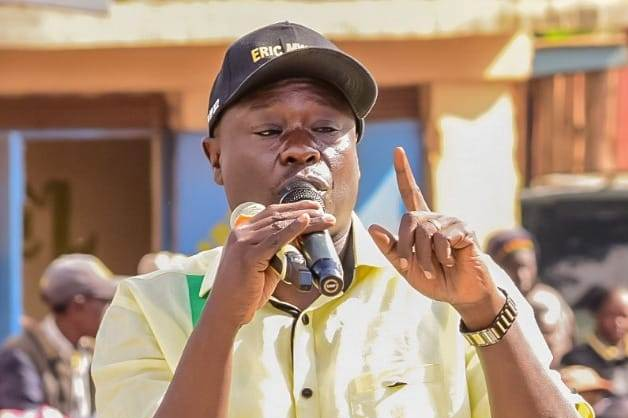 The MP on Saturday startled Kenyans after he said his life was in danger.

He laid bare claims that a clique of suspicious people have been on his trail for some time.

In an exclusive interview with the Star Monday, the first time MP uncovered details of intrigues that led to his public outbursts regarding threats on his life.

"I have been a subject of harassment by the state for the last four years. Since I became a running mate, the state has intensified surveillance on me and my family," he said.

A day after his outburst, Gachagua told the Star that suspicious individuals trailed him to his hotel room demanding access.

"When I spent a night in Nakuru on Friday, there were strange people who were asking for me. They came before I checked into my room where they wanted access but they were denied," he said.

"And at night, I heard some fellows hovering in the corridors. When I came out, they disappeared."

The DP William Ruto’s running mate could not reveal details of the hotel he slept and the Star could therefore not be able to pursue key questions like any CCTV footage within the facility to identify the faces of the individuals.

Gachagua could not explain how the same hotel that denied the people access to the room could allow the group to walk in the corridors.

Once the IEBC gazettes the names of Presidential and Deputy presidential candidates, the Inspector General of police is required to assign them, armed security officers.

The officers are deployed at their homes, both in City and rural. At least two officers will be required to provide security on a 24-hour basis.

A contingent of five officers will be required to accompany them in their campaigns to ensure maximum protection.

The team is headed by an officer of the rank of an inspector who is required to always liaise with police commanders of any place they will be visiting for security reasons.

The candidates and their running mates are expected to provide logistics to the officers seconded to them.

These include sentry rooms and vehicles for their movements.

While Gachagua is entitled to security as Deputy presidential candidate, both at his home and while on the campaign trail, the MP said he is not privy to their modus operandi.

"The government has given me some security personnel. I don't know them. I don't know what is their brief. They are there. I just trust God they are okay and they mean well. I am apprehensive," he said.

Gachagua is one of the three Ruto Allies who claimed that their lives are in danger.

The claims follow a meeting President Uhuru Kenyatta held in Nakuru on Thursday during which he allegedly said Gatundu South MP Moses Kuria, his Kiharu counterpart Ndindi Nyoro, Rigathi and Ruto will know he is the president.

The remarks sparked a war of words with Ruto leading his team in a combative attack on the President. While campaigning in Kapsabet Nandi County on Friday, Ruto took on his boss head-on over the alleged threats.

"We are the ones who voted for you, and now you want to threaten me? As long as you do not kill my children, we should respect each other," he said.

Uhuru, however, on Sunday denied claims of machinations to eliminate anyone.

The President said he has been subjected to abuse and attacks from the DP Ruto side for the last four years yet no one was victimised.

“There is no need of telling people that I want to kill you. Haven’t you insulted me for three years? Has anyone touched you?” Uhuru posed.

"But I am not afraid I will pay the ultimate price," he said.
News
2 months ago

He says his deputy should concentrate on his campaigns instead of crying foul his life is in danger.
News
2 months ago

Uhuru to Mt Kenya: Ruto is evil, elect him at your own peril