Four gunmen killed in clash with police in Turkana

They had earlier on engaged villagers in a gunfight, police said. 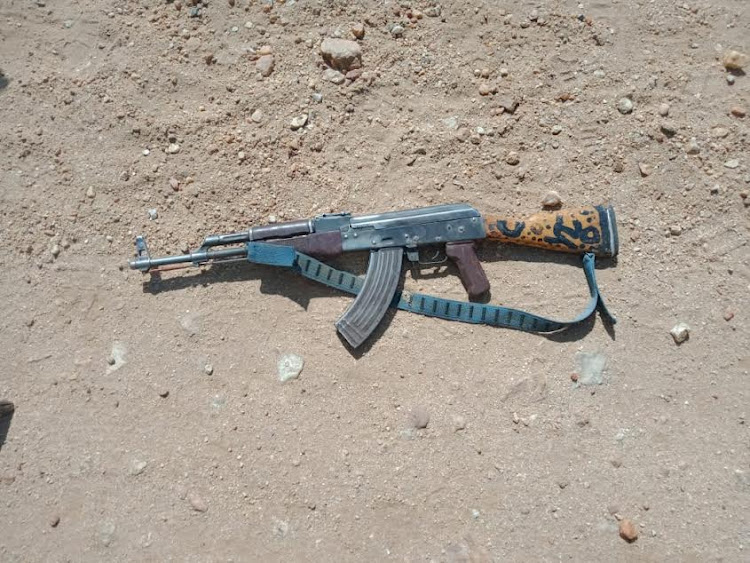 The AK47 rifle that was recovered from four slain gunmen in Lokwar village, Turkana County on August 1, 2022- NPS

Four gunmen were killed in a clash with police in a village in Turkana County.

Police said the men were part of a gang that had attacked Lokwar village on Monday in an attempt to steal animals.

A response team met some of them escaping on a motorcycle and killed four and found an AK47 rifle loaded with seven bullets on them.

The motorcycle was also recovered.

This was after the gang saw the police vehicle and opened fire at them, prompting the reaction.

Two others managed to escape in the Monday mid-day incident.

They had earlier on engaged villagers in a gunfight, police said.

Police say gunmen are roaming in the area with an aim of stealing animals and had heightened operations to tame the same.

The bodies were moved to a local mortuary.

Last week, two senior police officers were injured as they led in a gunfight with armed men who were robbing motorists along the volatile Kalemngorok-Lokichar road, in the same area.

A team of officers had responded to the scene after receiving complaints there were about six gunmen who were stopping vehicles on the route at gunpoint and demanding cash, food, electronics and other valuables prompting a shootout.

The route is notorious for highway robbers attacking motorists.

Most of the gunmen have been pushed from the nearby West Pokot region where security agents are conducting an operation.

Dozens of security agents are in the region to reinforce an operation aimed at ridding guns that are blamed on persistent insecurity and so far more than 30 assorted guns have been recovered.

Police said they hope to recover more of the weapons from illegal hands to ensure safety for all in the region.

“We continue to encourage those in possession of illegal firearms to take advantage of the immunity extended by the government and surrender their weapons to our security agencies and the National Government Administration Officers,” he said.

It is being conducted by multi-agency teams in the volatile areas of Elgeyo Marakwet, Baringo and West Pokot counties.

He blamed the violence on political incitement and expressed frustration at the lack of goodwill and cooperation from area leaders.

Dozens of people have been killed there and many displaced.

Eight people burnt to ashes in bandit attack in Turkana

The incident happened in Napeitom, Turkana East, on Sunday night.
News
2 months ago