•Uhuru said infrastructure was key to unlocking the economy and at the same time creating more employment opportunities for the people.

•The President stressed that all the development projects were because of the handshake between him and Raila that brought peace across the country. 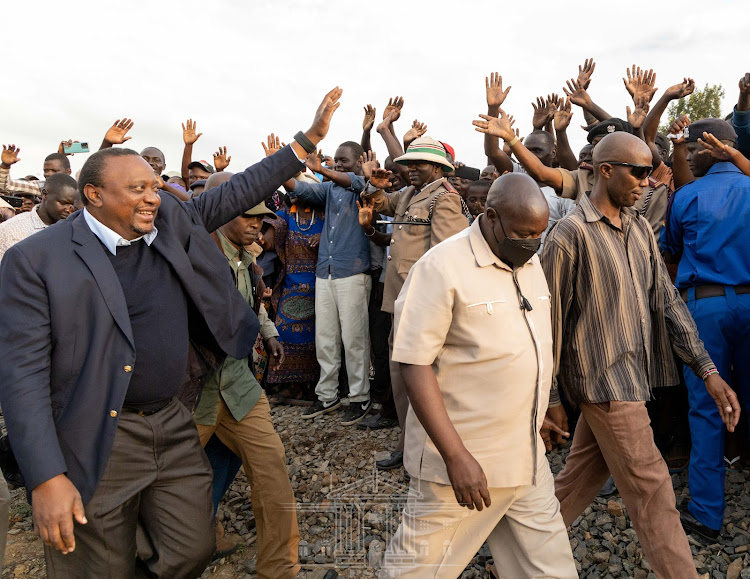 President Uhuru Kenyatta has drummed up support for Azimio Presidential candidate Raila Odinga challenging the people of Nyanza to turn up in large numbers and vote.

Uhuru told the electorates that to ensure that Raila gets to the State House, they must mean business and come out to vote and not just support him by word of mouth.

"Hiyo ndio shida. Lakini kama mnaamini Yale mnasema tare tisa hakuna mtu wa kuongea na mwenzake bila kuonyesha kidole na Rangi (That is the problem. If you believe in what you say, on August 9 make it a requirement that before anyone engages you, he or she must have voted ."

He said Kisumu people mean what they say hence they should prove that in the ballot box.

Speaking in Kisumu when he officially opened the Kisumu Railways Station, the President lauded KDF for their work, saying infrastructure was key to unlocking the economy and at the same time creating more employment opportunities for the people.

The President stressed that all the development projects were because of the handshake between him and Raila that brought peace across the country.

President Uhuru dismissed politics of hatred, propaganda, insults and creating of enmity, and stealing saying Kenyans must not go on that road which will only lead to poverty, bloodshed and destroying the country as a whole.

The President threw the crowd wild when he said "I don't think that is the road we would want to follow".

He said what Kenyans need is peace, truth, development, employment opportunity for the jobless, respect and unity in the county.

"This is the road that we need to take and the vehicle taking us there is that being driven by my friend 'Baba' Raila and his conductor Martha Karua because through this vehicle we will have that unity, prosperity and peace as a country".

He exuded confidence that Raila would continue with his development projects and would not tolerate corruption.

"That's what they would do if they were in power. They are led by the devil."
News
2 weeks ago

Diaspora in UK put Uhuru on notice over attacks to Ruto

They called Kenyans to reject the Azimio Coalition, which they labelled a political project of Uhuru.
News
2 weeks ago
WATCH: The latest videos from the Star
by FAITH MATETE Correspondent, Kisumu
News
01 August 2022 - 21:05