• In a statement on Monday, Kuppet secretary general Akello Misori said the directive for learners to resume school on August 11, two days after the elections is misplaced.

• Magoha said in a statement the decision was arrived at after consultations. 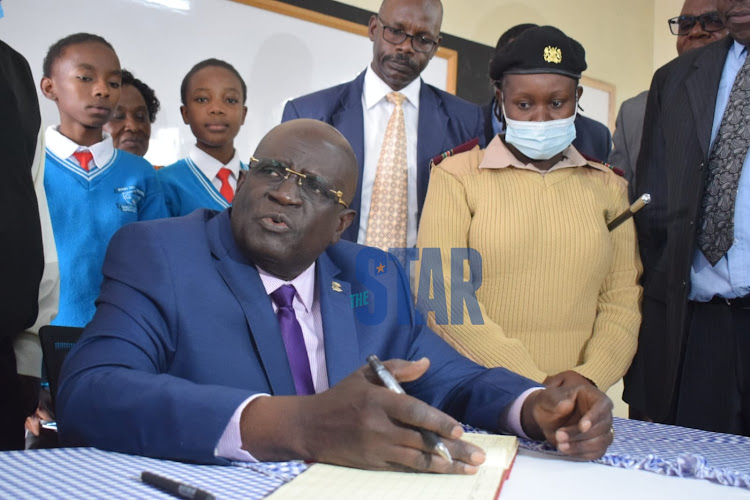 Education CS George Magoha during a launch of a CBC classroom at Mwiki Secondary School on June 6, 2022.
Image: CHARLENE MALWA

Education CS George Magoha has been faulted over his abrupt directive for schools to close on Tuesday to pave way for elections.

In a statement on Monday, Kuppet secretary general Akello Misori said the directive for learners to resume school on August 11, two days after the elections is misplaced.

"This is outright impractical, since the elections will take nearly a week to conclude. Moreover, parents need reasonable time to assess whether their children can travel and settle in schools safely," Misori said.

Misori termed Magoha's directive as hasty saying the CS did not consult education stakeholders before making the decision on school closure.

This even as Magoha said in a statement the decision was arrived at after "further consultations."

"Any stakeholder with a legitimate interest in the school calendar would have advised against the hasty decision," Misori said.

On Monday, Magoha directed all schools to release learners on Tuesday for mid term to enable preparation for the conduct of the August 9 general elections.

Misori said Magoha had sufficient time to decide when learners should take a break because he knew schools would be used as polling and tallying centers.

"The closure will seriously disrupt the delivery of the curriculum. Most schools had scheduled internal examinations ahead of the original closure date on August 16," Misori said.

A gazette notice by the Independent Electoral and Boundaries Commission indicated that almost 250 schools will be used as tallying centres.

Schools closing for ten days due to elections - Magoha

"We are breaking again on the 6th of this month and we will not open again until August 15th."
News
4 months ago

Officials say by opposing demands for salary increase, Education CS does not mean well for teachers.
Counties
4 months ago

Magoha orders immediate closure of schools ahead of polls