He said the individuals whose names he did not reveal will be sent home if he is elected.

• Speaking in Eldoret on Monday, the DP said that he knows the people behind the distribution of the leaflets. 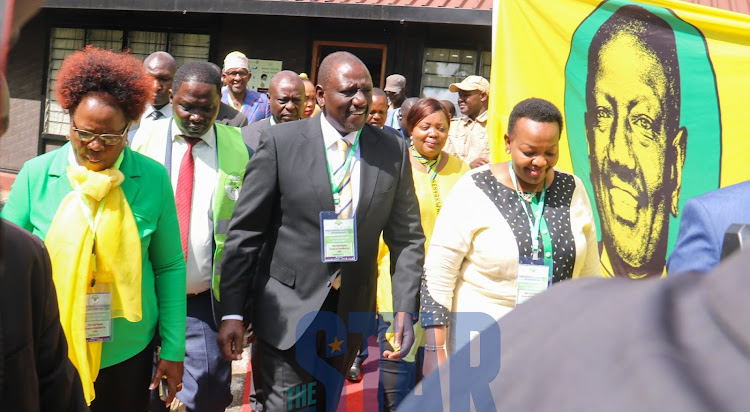 UDA presidential candidate William Ruto accompanied by his running mate Rigathi Gachagua and other leaders at Bomas of Kenya on June 4,2022.
Image: FILE

Deputy President William Ruto now claims that leaflets coercing people to support a particular faction were distributed by people from the office of the President.

Speaking in Eldoret on Monday, the DP said that he knows the people behind the distribution of the leaflets.

He called on President Uhuru Kenyatta to warn certain individuals at his office to desist from causing unrest in the country.

"The DCI tried to bring issues of post-election violence, he was told off by the president. I want to tell my friend Mr President, the same way you told off (DCI George) Kinoti when he started that nonsense of post-election violence please tell off the characters at the office of the president who are now printing pamphlets to cause disharmony in the Republic of Kenya, they need to stop because they are not about to succeed."

The DP said the individuals whose names he did not reveal will be sent home if he is elected president on August 9.

On Sunday, Interior PS Karanja Kibicho said they are privy to threats being pushed by a section of people to coerce people to support a particular faction.

He warned that those behind such threats will be brought to book even as he divulged that a multi-agency team has already been dispatched to handle the matter.

"Elections are won through persuasion, not coercion or fearmongering. To our dismay, we're aware of leaflets warnings the electorate of dire consequences should they fail to vote for certain candidates on August 9," he tweeted.

Even though the PS did not divulge the exact areas affected, the Star came across images of posters pinned on trees containing inciting writings.

Social media images of the leaflets showed that one of the areas affected is Uasin Gishu county.

"We're aware of leaflets warnings electorate of consequences if they fail to vote certain candidates."
News
2 months ago

Last week, the DP accused President Uhuru of planning to kill his children.
News
2 months ago

Deep state is an empty rhetoric, Ruto tells off Raila