Back up teams sent to specific regions ahead of polls

Already, officials have mapped out regions seen to be in need of more personnel to ensure peaceful polls. 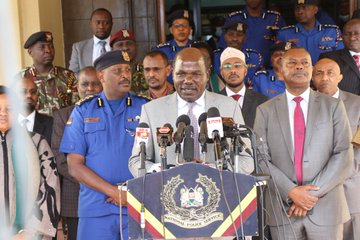 Police backup teams started to depart Nairobi for regions they are deployed ahead of next week’s general elections.

The teams met at the Administration Police Training College in Nairobi for final briefing and preparations as they were sent to the places in need.

Already, officials have mapped out regions seen to be in need of more personnel to ensure peaceful polls.

“The officers include those from GSU, RDU and other special groups to back up these needy areas,” said an insider aware of the deployment.

National Police Service has disclosed a total of 150,000 officers will be deployed to cover the polls.

Mutyambai said the security personnel are under instructions to guarantee Kenyans their safety as they go out to cast their votes.

“Formed police units under the National Police Service have also been deployed across the country to offer tactical support to general duty officers before, during, and after the general elections,” he said.

He said the government had given the service adequate resources, which include additional vehicles and operational equipment, to ensure seamless and continuous operations during and after the polls.

“Officers are well resourced and in a high state of readiness to handle all forms of threats that may arise before, during, and after the general elections,” he said.

Mutyambai said the election security secretariat is conducting regular threat and risk analysis to identify threats to national security which in turn will inform resource deployment in real-time.

“Such emerging threats shall be tackled promptly. I, therefore, would like to warn those hell-bent upon acts of criminality and lawlessness to desist,” he said.

Police have established a national election security command centre to be manned on a 24-hour basis and are fully equipped to handle election-related security challenges.

Interior Cabinet Secretary Fred Matiangi has said they are ready to help the IEBC deliver the polls.

Police say they have developed elaborate security and intelligence strategy to ensure the elections are peaceful.

Areas deemed to be flashpoints for violence have been mapped and police will be ready to avert a repeat of 2007-08.

After the presidential result of the 2007 general election was disputed, violence erupted, leading to the death of more than 1,000 people.

Many others were displaced. An inquiry into the post-election violence pointed to the police as being ill-prepared, partisan and heavy-handed in trying to quell the chaos.

They decried the rising cases of threats, intimidation, physical assault and profiling by politicians.
News
2 months ago