Raila said that Kenya was now ripe for a revolution that would transform the country economically.

• He warned DP William Ruto and his Kenya Kwanza brigade that a political tsunami would sweep them aside.

• He said the Azimio government would take care of all Kenyans regardless of where they lived. 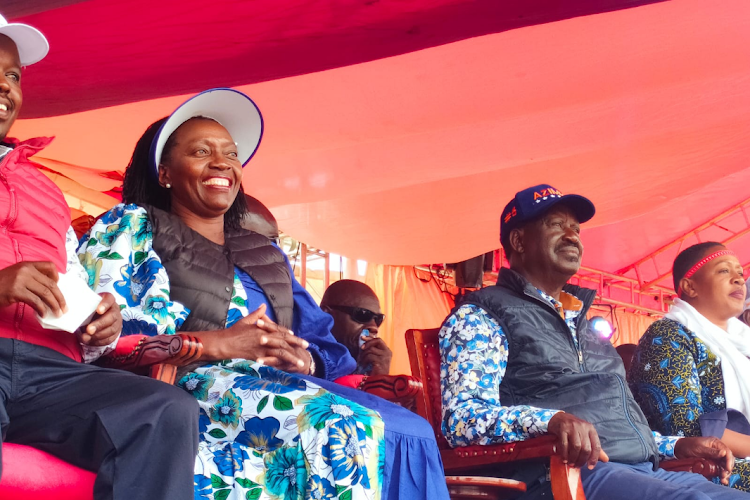 Azimio presidential candidate Raila Odinga says next week's election will be a decisive moment as the country will choose between liberation and continuity of corruption.

He warned DP William Ruto and his Kenya Kwanza brigade that a political tsunami would sweep them on August 9.

Raila said that Kenya is now ripe for a revolution that would transform the country's economy towards prosperity.

Raila was speaking at the Huruma grounds in Eldoret where he led Azimio campaigns.

The well-attended meeting was also addressed by his allies including Suna East MP Junet Mohammed.

"I said long ago that there was a tsunami coming but they said I was lying. It's now just a few days left," said Raila

He said residents of the region must be ready to vote for anyone they want without intimidation or threats.

He said the Azimio government would take care of all Kenyans regardless of where they live.

Raila said corruption was undermining Kenya's growth and hence causing Kenyans to suffer due to poverty.

"We must put up industries to create jobs for our youth and also improve our agriculture," Raila said.

He reiterated that Ruto must disqualify his running mate Rigathi Gachagua whom he described as a convict.

Raila said last week's decision by the High Court ordering Gachagua to surrender sh 200m to the state was the same as a conviction.

"We are running against convicted thieves and they can not fool Kenyans anymore."

He promised that in 100 days, Kenyans would see great change.

"Our country is at crossroads. We must choose if we want liberation or continued corruption", Raila said.

Karua accused DP Ruto of lying that his life and that of his family were in danger yet he was protected by more than 250 security officers.

"He is still an employee of the government as DP with full protection", Karua said.

Junet also hit out at Ruto for the same reasons saying he owes Kenyans explanation on unresolved murder cases.

"Those in Kenya Kwanza should first tell us who killed Musando, Jacob Juma and Yebei", said Junet.

Peter Kenneth said DP Ruto's family was safe and there was no cause for alarm.

How Raila, Ruto ratings have changed

Raila maintains lead over Ruto with 46 per cent - Tifa