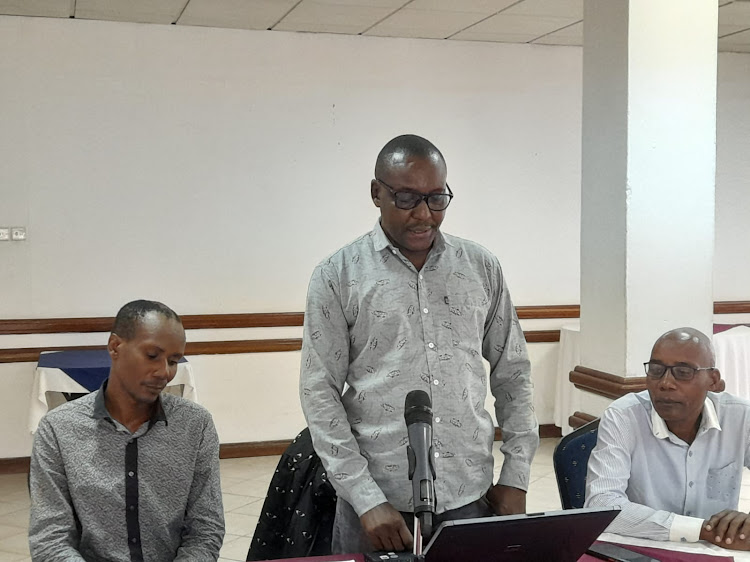 George Dzombo, the lead researcher at Research and Governance Professional Organisation, flanked by Wilkin Asande who is a lecturer at Kenyan National Coast Polytechnic and Anderson Chai, also a lecturer at Technical University of Mombasa.
Image: HANDOUT

The decision by IEBC to bar former Nairobi governor Mike Sonko from contesting in Mombasa will lead to huge voter apathy, an opinion poll has shown.

A poll carried out by Research and Governance Professional Organisation between July 19 and 23 reveals that most Mombasa residents are bitter about the decision to bar Sonko.

The research shows the majority of Sonko’s supporters will vote for former senator Hassan Omar in rebellion against the current administration.

The five-day research targeted 6,000 respondents from six constituencies of Mombasa.

However, only 4,920 respondents were interviewed representing an 82 per cent response rate with a +/- one per cent margin of error.

Some 11.4 per cent of the total respondents said they were still undecided.

George Dzombo, the lead researcher, said most of Sonko’s supporters said they will vote for Omar.

However, Nassir has on many occasions said he is the ‘people’s project’ denying the reports that he is being fronted by Joho.

A week ago, Infotrak Research Kenya placed Nassir at 50 per cent, whereas Sonko second at 22 per cent, Omar third at nine per cent and Kingi of Pamoja African Alliance trailing at one per cent.

Dzombo said their research showed that Omar will lead in five out of the six subcounties namely, Changamwe, Kisauni, Nyali, Jomvu and Kisauni.

In Changamwe, Dzombo said, the majority of the voters are from the Kamba community, which is Sonko’s ethnic background.

He said in Kisauni, Omar will lead because of two factors; his choice of running mate, Selina Maitha and because of the current Kisauni MP Ali Mbogo.

“In Kisauni, Mbogo enjoys huge support, but because he might miss on the ballot, his supporters said they will vote for Omar,” he said.

He said Omar has also eaten a huge chunk of supporters of Mombasa businessman Suleiman Shahbal, who stepped down in favour of Nassir.

In Nyali, Dzombo said Omar will lead because of the sustained campaign by the current MP Mohammed Ali, who is also in UDA.

In Jomvu and Likoni, stiff competition will be witnessed between the two candidates, but Omar will lead with a small margin of not more than five percent, said Dzombo.

However, Nassir will command the lead in Mvita.

HASSAN OMAR: Why I chose Ruto over Raila

Anyone who seeks to serve the people of Mombasa has no choice but to be part of Kenya Kwanza.
Opinion
2 months ago

Nassir to use liquor cash to rehabilitate drug addicts

Governor aspirant says percentage of millions collected from liquor licencing to be set aside for rehabilitation and treatment.
Counties
2 months ago