Says institution is willing to hand over the requested pieces of land, but a procedure should be followed

•He said no document allows a university council to cede school land, as earlier directed.

•On Friday 22, the Star obtained letters from the university to the ministry and the Head of Public Service Joseph Kinyua confirming the council has surrendered the land. 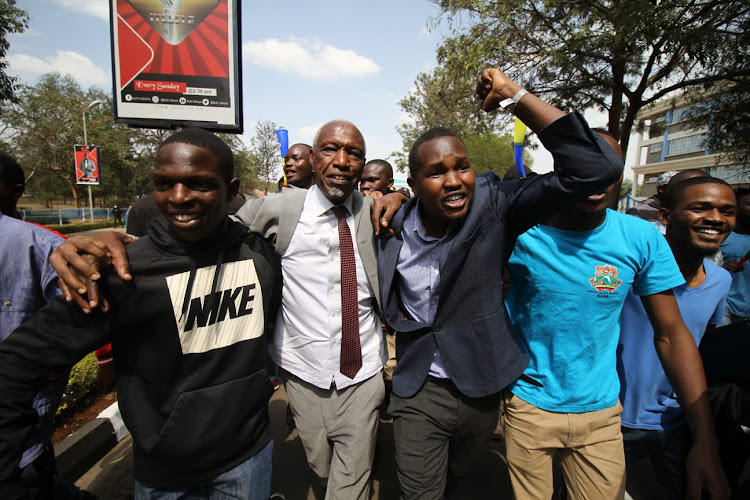 The new Kenyatta University council members led by Chrispus Kiamba were a no-show to receive ousted Vice Chancellor Paul Wainaina after the employment and labour relations court reinstated him.

Only board members, students and staff were present.

“I am the KU vice chancellor and I'm happy to be back to continue from where I left, that is the admission of first years,” Wainaina said.

He said the institution is willing to hand over the requested pieces of land, but a procedure should be followed.

He said no document allows a university council to cede school land, as earlier directed.

“Council according to all procedures, documents including statutes of the university has the mandate to preserve what is theirs,” Wainaina said.

On Friday 22, the Star obtained letters from the university to the ministry and the Head of Public Service Joseph Kinyua confirming the council has surrendered the land.

However, they said they cannot yet locate the original title deed and are still looking for it.

Kiamba wrote to Kinyua on July 15 saying the council met on the same day and directed the acting vice chancellor to surrender the main title deed.

Wainaina went ahead to clarify that the land in question had already been allocated for various projects.

“We wanted to construct a school of business, recreational centre and a proposed hostel for 10,000 students,” he said.

On the hospital issue, Wainaina faulted the stakeholders in the land tussle saying the process might see the school of medicine get closed.

He said the hospital is sitting on KU land and the plan to separate its ownership will affect students.

“That will be very detrimental because we will be denied the medical accreditation and our medical school will be deregistered,” he said.

He said there can’t be an acting vice chancellor when there’s a substantive one holding office.

“I am here and the court has ordered that I come back. Waceke Wanjohi (former acting VC) is a member of my management so we will work harmoniously,” he said.

Wanjohi was appointed to serve in an acting position by the new council.

Wainaina was received back to the institution on Wednesday by staff, board members and students.

He cleared the air on recent reports that he had resigned, saying he was asked to leave office.

“I did not resign, I only told my staff that I may not be able to talk to them again as VC. That did not suggest that I resigned,” Wainaina said.

The VC said he had seen a looming suspension from his duties due to his failure to respond to previous demands.

However, Wainaina could not respond to other matters concerning his occupation in office and the new council, due to the ongoing court case.

Wainaina had been sacked for failure to respond to a request by Kinyua.

Kinyua had written a letter on July 4 instructing the council to hand over the institution title deeds, a request that was declined, leading to Wainaina's tribulations.

But the court has now issued an order suspending his sacking pending the hearing of the case.

“This honourable court is pleased to issue a temporary order suspending the implementation of the decision contained in the letter dated July 12 by Professor Crispus Kiamba into suspending, terminating and/or dismissing the petitioner from the Office of the Vice Chancellor, rendering his position vacant and/or revoking his salary,” judge Jacob Gakeri said.

The court stopped the institution from advertising the VC's position pending the determination of the case.

The changes were made to make it possible for the transfer of the land in question to be effected.

Wainaina was replaced with Waceke Wanjohi who even presided over the graduation on Friday.
News
2 months ago

He was originally sacked over allegations regarding land adjacent to Kenyatta University.
News
2 months ago