Omtatah wants the court to bar the seven judges from assuming office.

•Omtatah wants the court to bar the seven judges from assuming office pending a hearing of his case.

•He argues that it's practically impossible for the JSC to appoint seven individuals to fill six (6) vacancies. 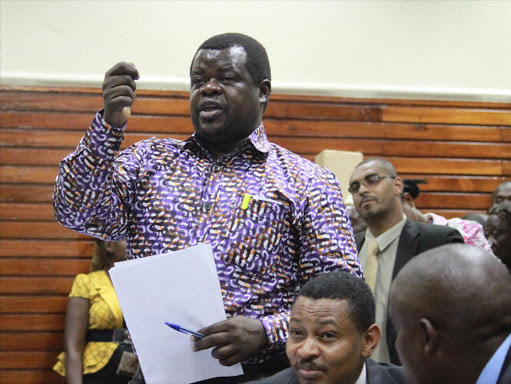 FILE FILE: Activist Okiya Omutata in a mombasa court Mar 31 2014 where he alleged his life is in danger after two unknown people approached him and show him guns./NOBERT ALLAN

Activist Okiya Omtatah has challenged the recent appointment of seven new judges by the Judicial Service Commission (JSC) to the Court of Appeal.

In a petition filed in court, Omtatah argues that the decision is irregular, unlawful, and unconstitutional because it appointed seven judges when they had advertised for only six vacancies.

He argues that it's practically impossible for the JSC to appoint seven individuals to fill six (6) vacancies.

“But if the vacancy really exists, then that one slot, the seventh, was deliberately hidden from the public to achieve improper motives or to advance corrupt practices,” reads court papers.

Omtatah wants the court to bar the seven judges from assuming office pending a hearing of his case.

He has also accused JSC of discriminating against the judges of the Employment Court and Environment court saying none of the judges from the two divisions who applied was considered.

He argues that the misconduct by JSC is killing the morale and motivation of the victimised judges who have been marginalised within the judiciary.

“In fact, as matters stand today, the outcome of the recruitment was already predetermined against appointing any judge of the two courts to the Court of Appeal,” he claims.

“It cannot be overstated that there is a critical need for diversity at the CA, given appeals from the two specialist courts lie at that Court,” he argues.

“Overall, the judges of the two courts are equally qualified and experienced to hear and determine all other cases before the CA,” he argues.

Hence, it is unacceptable that they are by default locked out of appointments to the CA simply because of the Courts they serve.

He said that the JSC is bound by Article 10 to disclose to the public the scores of each candidate but the Commission does not do so.

“This lack of transparency and accountability is what has resulted in the JSC recommending seven (7) persons for appointment to fill the six advertised slots,” reads court papers.

He further says that to make matters worse, judges from the two courts are not recognised and appointed as Presiding Judges of Stations, even where they head court stations in different parts of the country. extra remuneration as presiding judges.

“It is unacceptable that these judges should be treated as incompetent yet the JSC appointed them because they were qualified and competent pursuant to Article 166(5) of the Constitution,” he says.

Omtatah says that he is aggrieved that JSC has discriminated against and marginalised judges from the two specialist courts as though they are lesser beings when compared to High Court judges.

Win for DPP Haji as court grants him prosecution powers