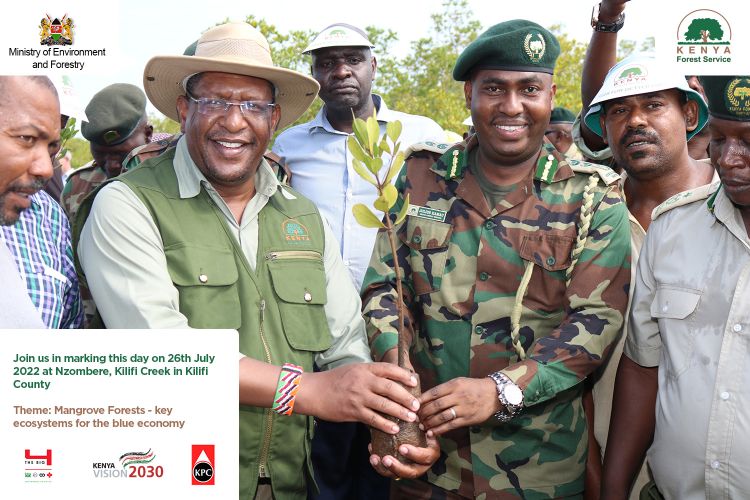 The National Forest Resources Assessment 2021 Report also indicates that the National Forest cover stands at 8.83 per cent from 5.9% in 2018. The country is now working towards achieving a 30% tree cover by 2050.

Mangrove forests are among the most productive ecosystems on earth and serve many important functions such as; water filtration, prevention of coastal erosion, coastal protection from storms, carbon storage, and biodiversity protection, among others.

Due to the concern on the loss and degradation of mangrove ecosystems world-wide, the General Conference of the United Nations Educational Scientific and Cultural Organisation (UNESCO) in 2015, adopted the proclamation of the International Day for the Conservation of the Mangrove Ecosystem celebrated each year on 26th July.

The aim is to raise awareness of the importance of mangrove ecosystems as “a unique, special and vulnerable ecosystem” and to promote solutions for their sustainable management, conservation and utilisation.

In Kenya, this was marked for the first time in 2019 in Kwale followed respectively by Lamu and Mombasa Counties. Over 28,987,284 seedlings/propagules have been planted since the day was first marked. 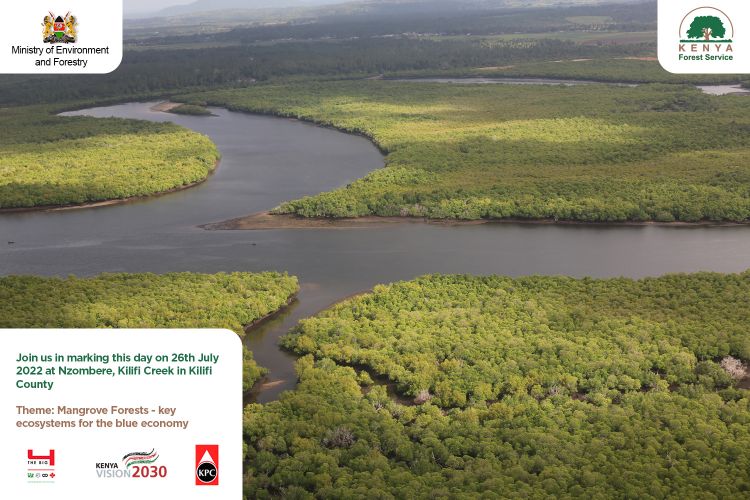 The mangrove ecosystem uniquely responds to attainment of the various Sustainable Development Goals (SDGs) directly and indirectly thus the emphasis on the importance of their conservation, protection and management.

The United Nations Decade of Ocean Science for Sustainable Development (2021-2030) vision which states that "science we need for the ocean we want" is a convening framework for diverse stakeholders to co-design and co-deliver solution-oriented research needed for a well-functioning, healthy, safe and resilient ocean in support of the 2030 Agenda and beyond.

Capacity development, ocean literacy and the removal of barriers to full gender, generational, and geographic diversity are essential elements of the Decade. The ocean is an important source of the planet’s biodiversity and plays a vital role in the climate system and water cycle. 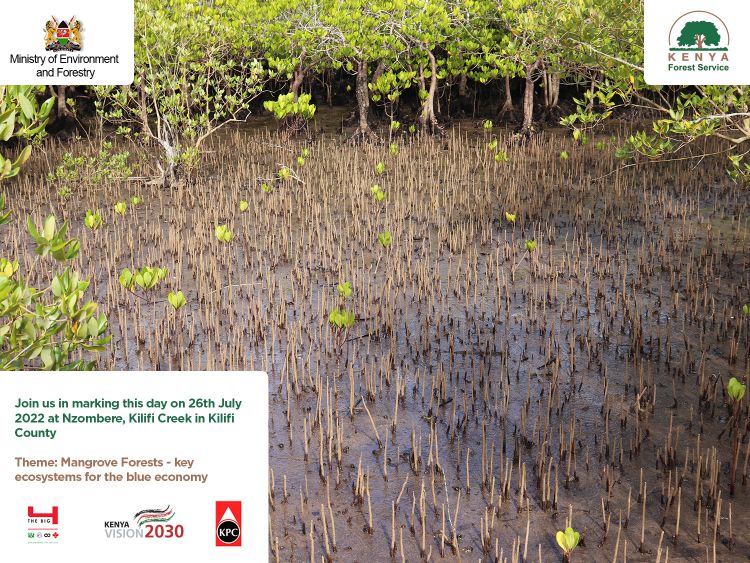 Underlining the inter-linkages and potential synergies between Goal 14: “Conserve and sustainably use the oceans, seas and marine resources for sustainable development” and the other Sustainable Development Goals and recognize that the implementation of Goal 14 can contribute significantly to the realization of the 2030 Agenda, which is integrated and indivisible in its nature.

The UN Decade on Ecosystem Restoration is a rallying call for the protection and revival of ecosystems all around the world, for the benefit of people and nature aiming to halt the degradation of ecosystems, and restore them to achieve global goals.

Only with healthy ecosystems, can we enhance people’s livelihoods, counteract climate change, and stop the collapse of biodiversity.

The UN Strategic Plan for Forests 2030 with a set of 6 Global Forest Goals and 26 associated targets under the United Nations Forest Forum calls for a world where forests are “sustainably managed, contribute to sustainable development and provide economic, social, environmental and cultural benefits for present and future generations.”

When sustainably managed, forests are healthy, productive, resilient and renewable ecosystems that provide essential goods and services to people worldwide.

An estimated 1.6 billion people – 25% of the global population – depend on forests for subsistence, livelihood, employment and income generation. It includes a target to increase forest area by 3% worldwide by 2030, signifying an increase of 120 million hectares. 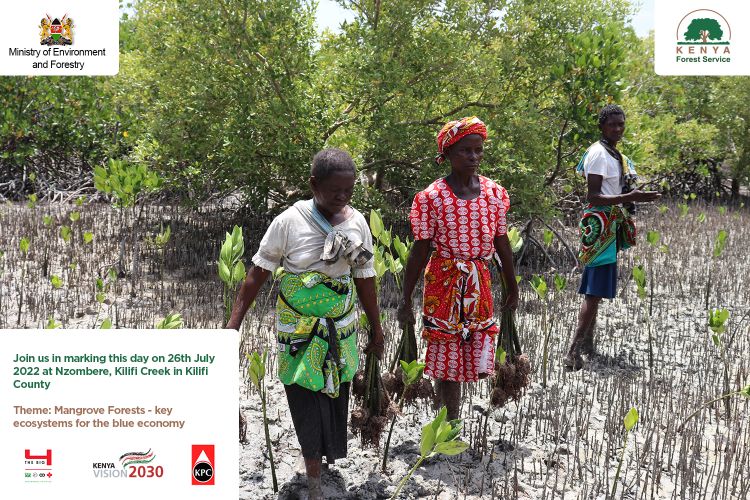 These geomorphic features coupled with climatic and human drivers influence the structure and productivity of mangrove forests. The forest structure is a function of the tidal regimes, which is controlled by the topography of the intertidal area and is classified into different forest types—fringing, riverine, over-wash, basin and dwarf forests 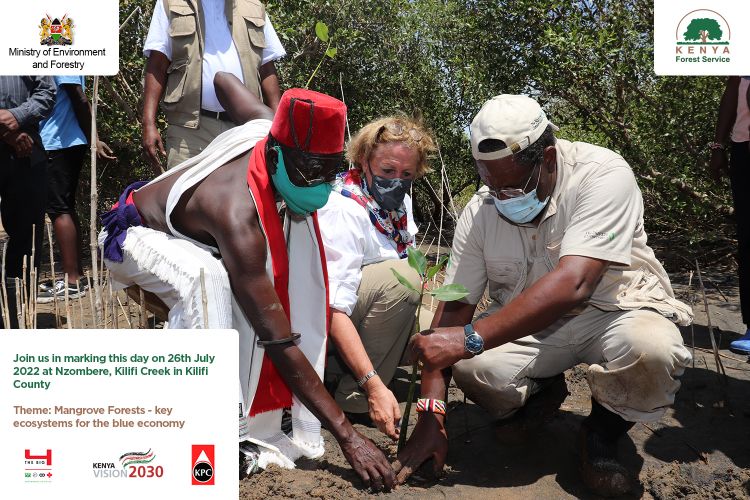 These forests occur on reef platforms behind protective outcrops of coral limestone in Lamu; in the estuaries of Tana and Sabaki rivers; behind marine influenced barrier dunes in Ngomeni; in the drowned river valleys of Mombasa, Mtwapa, Kilifi and Mongoni-Dodori; and within the sheltered bays of Vanga and Gazi.

Understanding the relationships between environmental settings and ecological functions is important for mangrove management because this ecosystem is prescribed as being controlled by factors emanating from the land, sea and air.

The total area of mangroves in Kenya is estimated at 61,271 ha; more than 60% occurring in Lamu County. 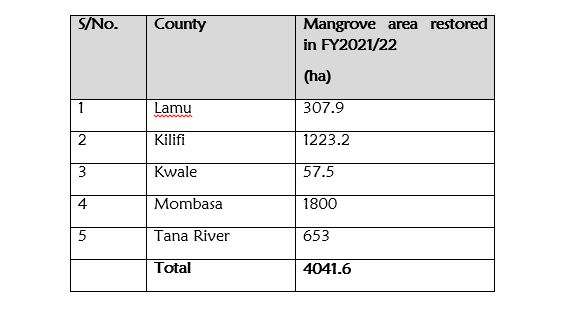 In order to enhance coordination and efficiency, the government prepared The National Mangrove Ecosystem Management Plan (2017–2027) that identifies management programmes implemented through various stakeholders ranging from government agencies, the civil society and the community.

The plan enumerates the mangrove resources available in each of the five (5) coastal Counties, past and current use, challenges and opportunities for effective management. 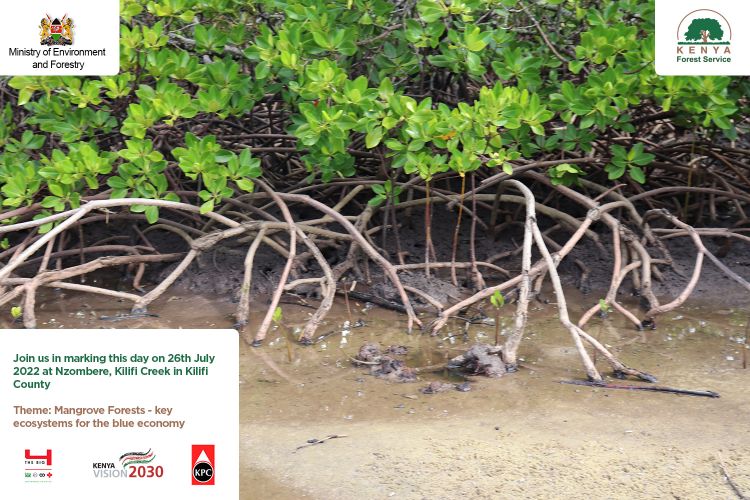 In contrast to the commercial utilisation of mangroves through wood harvesting, nature-based enterprises offer alternative income streams for communities, which promote conservation and protection to the mangrove ecosystem.

These include bee keeping for honey with distinctive taste, aquaculture, sequestration of carbon and its trade, fisheries, ecotourism and seaweed farming, among others.

A number of community groups have established apiaries within or near mangrove forests. One of the prominent ones is the Kipepeo Project in Malindi, Kilifi County that contributes towards income generation among the local community to supplement proceeds from butterfly trade. The honey from mangrove forest has a unique distinctive taste with a high demand from customers. The honey has a lower glycaemic index and high medicinal value.

Aquaculture takes place within mangrove areas. Crab farming has been taking place in Mida Creek where community groups raise crabs in wooden cages placed in water and anchored by mangroves.

An example is the Mida Creek Community Conservation Group that has a boardwalk and a restaurant (the Crab Shack) in which delicacies such as crab samosas made from crabs from the crab farms are served.

In other areas, community groups have developed ponds within mangrove areas where they raise fish and prawns, which has been observed to trigger natural regeneration of mangroves.

State Department of Fisheries at Ngomeni initiated trial shrimp aquaculture in mangrove areas in 1980s. The trials recorded a production of 4.0 t ha-1 yr-1; which is comparable to yield obtained in South East Asia. 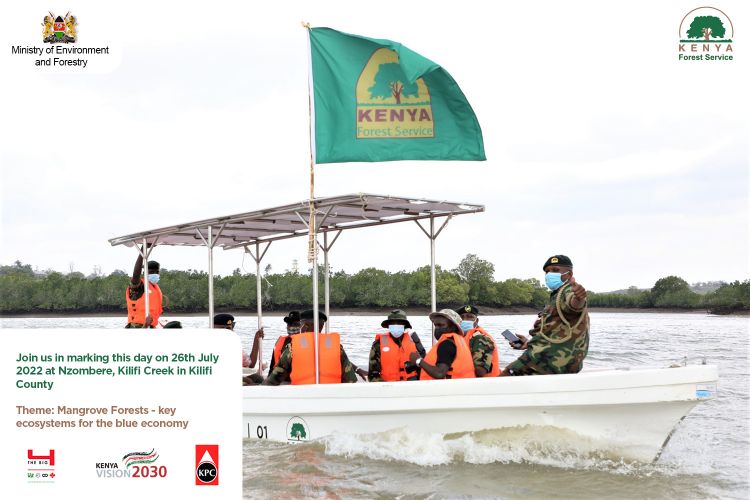 Gazi and Makongeni villages have in place a carbon offset project, the first of its kind in the world to successfully trade mangrove carbon credits. Mangroves store three to five times more carbon than terrestrial forests, which makes them elemental in the fight against carbon emissions and global warming.

The carbon-offset project is an initiative of Mikoko Pamoja a community group with the support of the Kenya Marine and Fisheries Research Institute (KMFRI), and the sale of carbon credits used to fund mangrove conservation alongside livelihood programs within the villages.

The group plants four thousand seedlings (about one acre) every year at the degraded mangrove sites and at the same time maintains the existing forest. This project is designed to sell 3,000 tonnes of CO2 per year for a period of twenty years.

Income from this trade has created employment of the local community as well as supporting development projects such as the supply clean portable water in the villages and renovation of classrooms in local schools, among others.

More than 85% of fishing activities along the coast are carried out by artisanal fishermen in the shallow inshore areas within and adjacent to the mangroves directly employing more than 20,000 fishers.

It is estimated that 70% of commercial fishery species depend in one way or another on the mangroves as breeding and feeding habitats. Other fauna supported by the mangrove environment include molluscs, crustaceans, reptiles, mammals and birds. Based on empirical data, the value of mangroves to fisheries in Kenya has been estimated at Sh9,612 ha-1 yr-1.

These facilities give visitors easy access to the mangrove habitat that would be otherwise difficult to see at close range. They also provide education on mangroves’ ecology and conservation using interpretation and community guides. Income from these facilities contributes significantly to improvement of livelihoods.

Seaweed farming is an enterprise taking place in South Coast by a village known as Kibuyuni with training and support from KMFRI.

However, this has faced challenges from infrastructure development such as the test drilling for an industrial port at Shimoni that occasioned the loss of an entire crop for people of Mkwiro village.

The experience obtained so far indicate that it is a potential income generation activity that will supplement fishing while reducing pressure from mangroves arising from illegal harvesting and clearance for rice farming. Kenya Forest Service (KFS) would like to thank the following organizations for their commendable efforts in mangrove forest conservation.