Wajackoyah and Raila have bolted out of the debate.

•The debate intends to give candidates a platform to articulate their plans and agenda if elected. 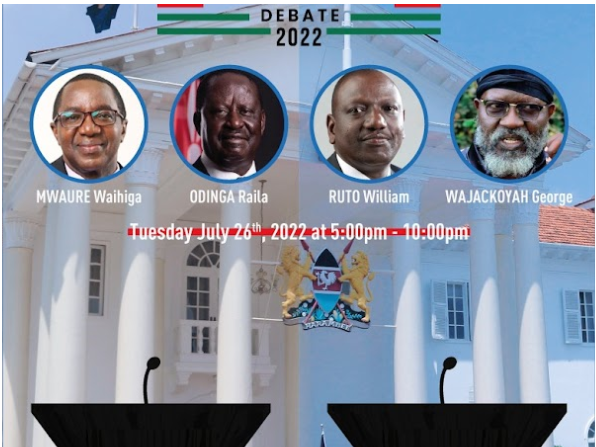 The Head of the Presidential Debates Secretariat Clifford Machoka has maintained that the debate scheduled for Tuesday, July 24 is still on.

His confirmation came even as two presidential candidates, Azimio's Raila Odinga and Roots party's George Wajackoyah, said they will not attend the debate.

The debate intends to give candidates a platform to articulate their plans and agenda if elected.

With the exit of Raila and Wajackoyah, Ruto and Wahiga will now have to use the platform to sway some votes.

Raila was to host a town hall meeting in Nairobi at the time of the debate but the event has been called off to a later date.

While announcing his absence, Wajockoyah said he will not be subjected to 'the joke of an already predetermined debate .'

"We would like to state that our presidential candidate Prof Wajackoyah will not attend the presidential debate because we will not subject the incoming President to the joke of an already predetermined debate," reads the statement in part.

On July 24, 2022, Raila, through his presidential campaign spokesperson Makau Mutua said the Azimio leader is not keen to share a national podium with Ruto, whom he described as a person who lacks basic decency.

“As is well known, our opponent has traversed the country hurling epithets at us and other key national leaders, including vile sexist attacks," Makau said.

Kenya Kwanza leaders have lashed out at Raila for turning down an invitation to grace the debate.

She said that Raila deserves respect and he cannot attend a debate that that will be based on character assassination.
News
2 months ago