Victims of police killings, disappearance to get free legal help

Theuri said the practice of disappearing or killing suspects of a crime have no place in Kenya.

•Theuri said that the lawyers’ club will offer legal representation, file cases for compensation and prosecute police officers linked to the killings.

•He said the practice of disappearing or killing suspects of a crime has no place in a democratic society like Kenya. 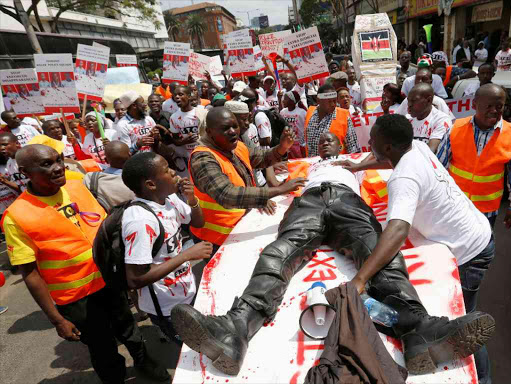 Families of victims of extrajudicial killings and enforced disappearance are set to enjoy free legal representation in seeking justice or in searching for their loved ones.

This is after the Law Society of Kenya and human rights lobbies including the Kenya Human Rights Commission, International Justice Mission and the network of mothers of victims joined hands in a new partnership.

LSK president Erick Theuri said the society will pile pressure on the investigative and prosecutorial players to get information as well as mount cases to help the families trace their loved ones and hand justice to the bereaved ones.

Families looking for disappeared or murdered loved ones require a great deal of legal assistance, including habeas corpus applications as well as enforcing accountability to complicit security agents.

Theuri said that the lawyers’ club will offer legal representation, file cases for compensation and prosecute police officers linked to the killings.

“Mothers and victims of enforced disappearance and extrajudicial killings have lacked a voice and we are saying from today, this coalition [with the lobbies] is going to give them a voice,” he said when he met the victim families at LSK’s offices in Nairobi.

He said that as a society they are looking “at the documented and the undocumented cases [and seek justice in courts] because the only refuge we can have is [in] the law and due process.”

He said the practice of disappearing or killing suspects of a crime has no place in a democratic society like Kenya.

Bennah Buluma, the lead coordinator for the mothers of the victims’ network, said that the fight against the vices needed a multifaceted front to realize the objectives.

She said the only request for the state was to return to the rule of law and accord every suspect the due process that the constitution accords them.

“We plead with this government, even if it only has a few days, it still has powers. We also plead with the coming one, please look into the issue of extrajudicial killings and enforced disappearances. They [victims] are people like any other,” Buluma said, accompanied by a host of mothers drawn from different victim families.

“If a young man has committed any crime, just arrest them and have them jailed. If anything, why do jails exist?”

Buluma, also known in the lobbies circles as Mama Victor, lost her son to a police bullet in Mathare in 2017 at the height of the post-election riots.

Her efforts to get justice have been in vain as the cop involved has not been held accountable.

Yankuzo was declared wanted by the police two years ago but was never arrested.
News
2 months ago
Post a comment
WATCH: The latest videos from the Star
by GORDON OSEN News Journalist
News
20 July 2022 - 00:27
Read The E-Paper