Gachagua in a quick rejoinder said Karua quit when Raila was making life impossible for her.

•“My statement that “I don’t share any values with Raila Odinga, nor do I admire his politics. Both he and Kibaki have been unable to root out corruption” didn’t indicate they are the ones perpetrating corruption individually ,” she said. 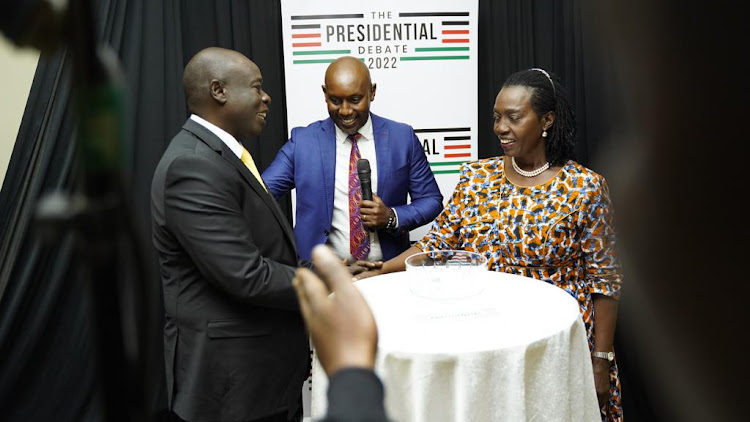 Speaking during the DP presidential debate on Tuesday, Karua said she quit because she had her principles.

When she quit, she said that she did not share values with Raila Odinga nor did she admire his politics.

But on Tuesday, she said she left since Kibaki and Raila were unable to root out corruption.

“I resigned on principle…Whatever dynamics there might be, later on  I worked with Raila, we were friends of CORD and worked together in 2017,” she said.

“I did not indicate they are the ones perpetrating corruption individually."

Karua said the Kibaki and Raila had failed to tackle issues of graft and her integrity would not allow her to stay in government.

“But with the Karua and Raila ticket we will fight corruption. Raila and Kibaki disagreed but they resolved their issues privately, that’s what people who have respect for the public do .”

But UDA running mate Rigathi Gachagua in a quick rejoinder said Karua quit Kibaki's government when Raila was making life impossible for her.

“… any leader who couldn’t work with Mwai Kibaki, I have serious doubt they can work with anyone else,” Gachagua said.

But Karua said she resigned respectfully.

"Mwai Kibaki was a Gentleman. Karua is a quitter.”