• He urged Kenyans to participate in the debate as it may inform their decision on August 9. 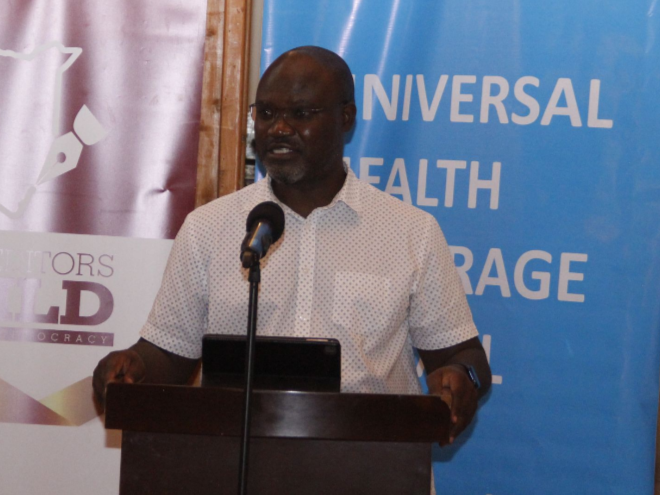 KEG president Churchill Otieno speaks during a retreat between editors and Ministry of Health officials in Malindi on Thursday
Image: FILE

President of the Kenya Editors Guild Churchill Otieno has said Kenyans should take the presidential debate seriously as it is a platform to understand what the candidates stand for.

In an interview on Citizen TV on Monday, Churchill said candidates offer themselves to serve and debates prove to be an important channel allowing candidates to connect with voters.

"Debates are a chance for those voters to understand the platforms on which these candidates are running," Churchill said.

"Kenya is a growing democracy, and in all democracies, people donate their sovereign power to individuals as they elect them to power."

He urged Kenyans to participate in the debate as it may inform their decision on August 9.

He said this after the Presidential Debate Secretariat announced last week the deputy presidential debate will be held on Tuesday, July 19, 2022.

The debate will be beamed live between 5 pm and 10 pm on TV and radio stations.

It will be two-tiered, where the first tier debate will feature Deputy Presidential running mates whose popularity in the three most recent opinion polls stood below five per cent.

The second-tier debate will feature Deputy Presidential candidates whose popularity rating in the last three opinion polls was above five per cent.

The second-tier debate will be held from 8 pm to 10 pm.

The 2022 Presidential debate is scheduled to be held on July 26.

The debates will be held at the Catholic University for Eastern Africa (CUEA) main campus situated in Karen, Nairobi, from 5:00 pm to 10:00 pm.

Voters who wish to participate are requested to submit their questions via text message to 22843.

How you can participate in Deputy Presidential debate