On the third deal, the two presidents recommitted to the fight against terrorism.

• "They reaffirmed the shared commitment of the two countries to work together on areas of mutual interest and to deepen bilateral relations," he said.

• Their fifth item of discussion was Kenya Airways, where they agreed that the scheduled flights to Mogadishu will resume immediately. 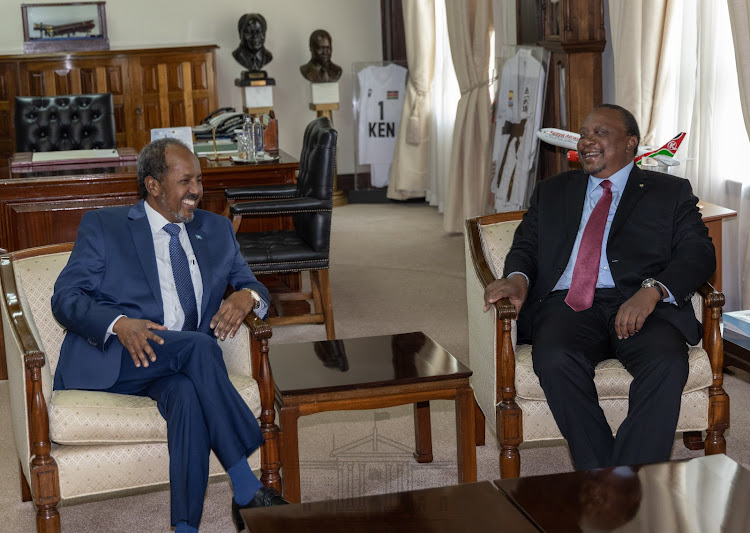 The two Heads of state held bilateral talks and signed deals to help maintain peace between the nations.

"They reviewed a wide range of bilateral, regional and multilateral issues, with emphasis on strengthening the existing bilateral ties between the two countries," Principal Secretary in the Ministry of Foreign Affairs Macharia Kamau said.

He said they made deals on emphasised cordial bilateral relations, bonds of heritage and shared destiny between the citizens of both countries.

Kamau said destiny is designed by a common desire for peace, stability, prosperity and respect for the sovereign and territorial integrity of their countries.

"They reaffirmed the shared commitment of the two countries to work together on areas of mutual interest and to deepen bilateral relations," he said.

In the third deal, the two presidents recommitted to the fight against terrorism.

"And in order to ensure success, directed the security agencies of the two countries to coordinate their efforts in this fight to ensure the safety and protection of the citizens of both countries, while upscaling the fight against terrorism," Kamau said.

Presidents Uhuru and Mohamud further agreed that Kenya and Somalia will coordinate with other regional and international actors to provide humanitarian assistance.

This is to help mitigate the effects of the current drought in the Horn of Africa region.

Their fifth item of discussion was Kenya Airways, where they agreed that the scheduled flights to Mogadishu will resume immediately.

This will be based on the existent bilateral air services agreement.

The aforementioned agreement will be reviewed by the relevant authorities, subsequently.

"Further Directed the relevant agencies to implement the issuance of Courtesy Visas free of charge/gratis, on arrival, for Dignitaries, Senators and Diplomats who hold Diplomatic Passports and a Note Verbale from the respective Ministries of Foreign Affairs," the deal said.

"For holders of Somali Service Passports, Courtesy Visas free of charge/gratis on arrival will be issued within Forty – Eight (48) hours, after completion of Online Visa Application accompanied by a Note Verbale from the Ministry of Foreign Affairs and International Cooperation".

The presidents agreed there was a need to process visas for holders of ordinary passports as soon as possible, preferably within 10 working days.

The two presidents further agreed to facilitate, diversify and promote trade and economic operation between their countries.

Uhuru and Mohamud directed that the Joint Commission for Co-operation (JCC) between Kenya and Somalia be convened in Mogadishu in August 2022.

This is to discuss and agree on matters of mutual interest such as joint security activities, defence, agriculture, trade, intelligence exchange, health, education, training in various fields, and continuous review of the visa regime.

"They directed the respective Ministries of Foreign Affairs to ensure the implementation of the issues agreed upon by the two Presidents within two weeks from the date of this Joint Communique," PS Kamau said.

The two-day State visit marked the first time that President Mohamud has been in Kenya since he was sworn in.