The four candidates will feature in a debate on Tuesday, July 19 from 5pm.

• The first tier debate will be held from 5pm to 7.30pm and will feature deputy presidential candidates whose popularity rating in the last three opinion polls stood below 5 per cent.

• The second tier debate will be held from 8pm to 10pm and will feature deputy presidential candidates whose popularity rating in the last three opinion polls was above 5 per cent. 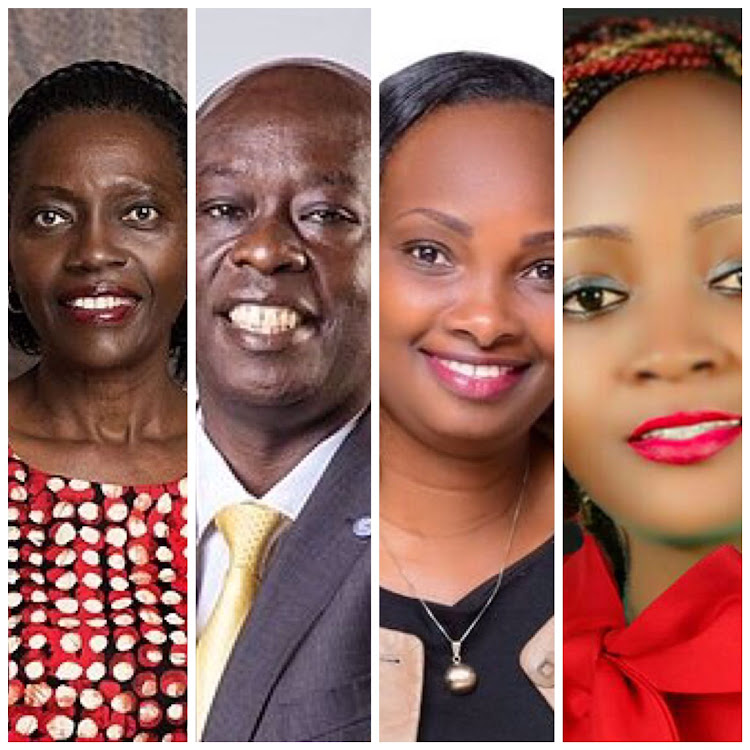 The debate will be beamed live between 5pm to 10 pm on TV and radio stations.

It will be two tiered where the first tier debate will feature deputy presidential running mates whose popularity in three most recent opinion polls stood below 5 per cent.

The first tier debate will be held from 5pm to 7.30pm.

The second tier debate will feature deputy presidential candidates whose popularity rating in the last three opinion polls was above 5 per cent.

The second tier debate will be held from 8pm to 10pm. 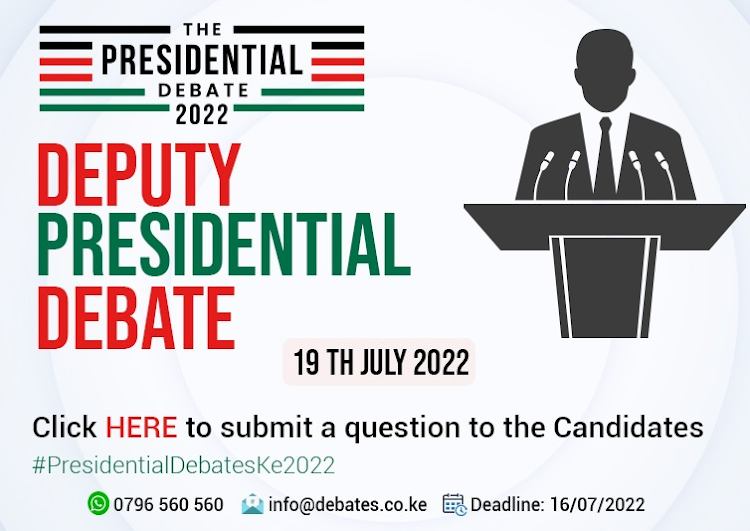 The debate will be held at the Catholic University for East Africa (CUEA) in Karen, Nairobi.

HERE is the link for submitting questions to the candidates.

Below is a profile of all the presidential running mates. 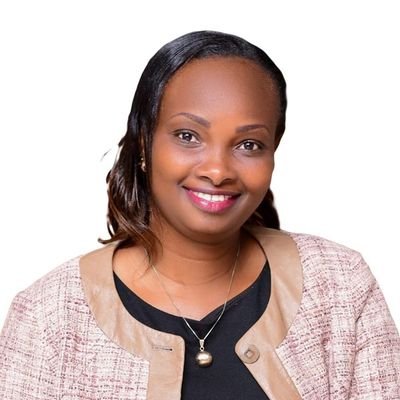 She is a communication expert “passionate about fighting corruption” 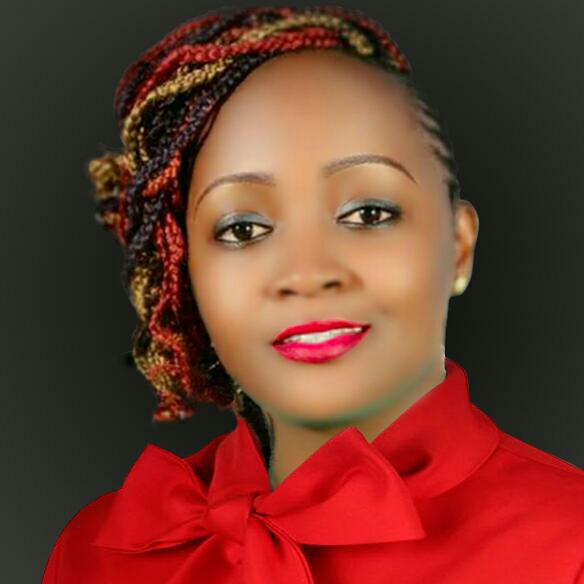 Justina Wambui Wamae is a 35 year old business lady turned politician who is the running mate of Prof. George Wajackoyah of the Roots Party.

She was selected as the running mate after applying for the position using the CV she used in applying for Principal Secretary Position after the elections in 2017.

Mrs. Wamae was born and raised in Kibera slum and is the first born in a family of two siblings. The 2007 post-election forced the family to move out of Kibera and settle at Syokimau.

Mrs Wamae is married to Alex Kanyi whom she met in 2017 during the campaigns. They are blessed with a 3 year old daughter.

Justina Wamae started school at Kilimani Primary School. She then proceeded to Limuru Girls High School for secondary education between 2002 and 2005.

She then joined Daystar University, graduating in 2010 with a Bachelor’s Degree in Management Information Systems 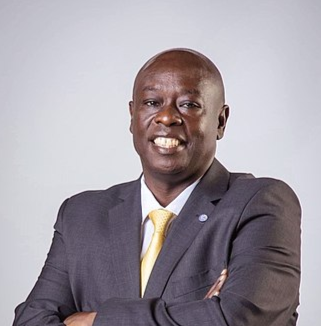 Rigathi Gachagua was born in 1965 in Hiriga village of Mathira Constituency, Nyeri County, being the eighth born child to Nashashon Gachagua Reriani and Martha Kirigo.

His parents were Mau Mau freedom fighters in Mt.Kenya forest where Nashashon Gachagua Reriani was building and servicing guns for the fighters.

He enrolled at Kabiruini Primary School from 1971 to 1977 before proceeding to Kianyaga High School for his O-levels and A-levels.

In 1985, he joined University of Nairobi where he graduated with a Bachelor of Arts Degree; Political Science and Literature in 1988.

Rigathi had Paramilitary training at Administration Police Institute in 1990. He also studied Advanced Public Administration Course at the Kenya School of Government between 1999 and 2000.

At the university of Nairobi,Gachagua was the Nyeri District University Students Association (Ndusa) leader as well as the chairman of The Association of Literature Students.

He is married to Dorcas Wanjiku Rigathi, who is a pastor based in Mathira.

After graduating, Gachagua was employed for a short time at the Kenya's Ministry of Home Affairs & National Heritage before he joined Administration Police Institute in 1990.

After graduating from the Administration Police Institute, Gachagua was posted at the Office of the then president Daniel Arap Moi, as a District Officer Cadet between 1991 and 1992.

Gachagua then went on to serve as a District Officer in Kakamega,Ng'arua and Laikipia districts.

Between 1999 and 2000, he joined Kenya School of Government where he graduated with a Diploma in Advanced Public Administration.

Between 2001 and 2006, Gachagua then worked as the Personal Assistant to Uhuru Kenyatta.

Between 2007 and 2017, Gachagua remained behind the scenes running his businesses.

Gachagua was elected as a Kenyan member of parliament for Mathira constituency in 2017 on a Jubilee ticket. In that race, he had edged out a bitter rival Phyllis Wambura Maranga who had claimed she had been rigged out of the Jubilee Party primaries.

Rigathi is facing a graft case and the Ethics and Anti-Corruption Commission (EACC) has applied to freeze some of his bank accounts.

Bills Sponsored in Parliament: No entry 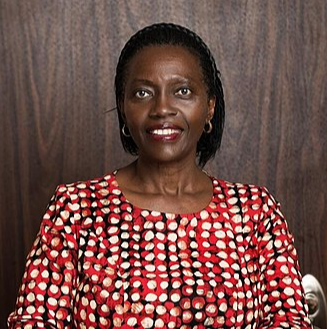 Martha Wangari Karua (born 22 September 1957) is a Kenyan who was long-standing member of parliament for Gichugu Constituency and is an Advocate of the High Court of Kenya.

She was Minister for Justice until resigning from that position in April 2009.

Karua ran for presidency in 2013 under the Narc-Kenya ticket making her the third woman to run for the highest office, after Charity Ngilu and Wangari Maathai in the 1997 elections. She emerged sixth in the race.

Martha is the daughter of Jackson Karua and his wife Josephine Wanjiru. She was brought up in the village of Kimunye in the as the second child in a family of eight, four girls and four boys.

She then attended Nairobi Girl’s secondary school for A levels. She studied law at the University of Nairobi from 1977 to 1980.

Between 1980 and 1981 she was enrolled at the Kenya School of Law for the statutory postgraduate law course.

After graduating, from 1981 to 1987 Karua worked as a magistrate in various courts including those at Makadara, Nakuru and Kibera, receiving credit for careful discernment.

Cases included the treason trial of Koigi Wamwere and that of the Kenyan Member of Parliament Mirugi Kariuki. At the risk of being blacklisted by the Moi government, she defended several human rights activists.

Karua was a member of the opposition political movements that successfully agitated for the re-introduction of multi-party democracy in Kenya in the early 1990s.

Karua joined Kenneth Matiba's Ford-Asili party. She walked out of the party leadership Elections which she regarded as compromised in September 1992 leaving her sole opponent Geoffrrey Karekia Kariithi to be declared winner.

She joined the Democratic Party of Kenya (DP) where she won the Party nominations / ticket in November 1992 and proceeded to win the election as Gichugu MP in December 1992 against the incumbent Geoffrrey Karekia Kariithi freeing Gichugu constituents from the Kareithi – Nahashon Njuno rivalry.

Karua became the MP for Gichugu constituency and the first woman lawyer to be popularly elected to Parliament. She was elected as the Democratic Party’s legal affairs secretary in 1993.

In 1998, Karua declined the position of Shadow Minister for Culture and Social Services which conflicted with her position of National Secretary for Constitutional Affairs (an elected office) that made her the official spokesperson on legal matters of the party.

She opted to resign her position as the National Secretary for legal and constitutional Affairs.

In 2001, when the Constitutional Review Bill was laid before the House, the entire Opposition with the exception of Karua walked out of Parliament.

The Bill had been rejected by the Opposition as well as Civil Society but Karua was of the view that as elected representatives, instead of walking out, it would be more prudent to remain in Parliament and put the objections on record.

She therefore chose to remain in the Parliament and her objections to the Bill were duly recorded in the Hansard.

Until 6 April 2009 she was the Minister of Justice, National Cohesion & Constitutional Affairs. She also previously served as the Minister of Water Resources Management & Development, and was behind the implementation of the Water Act 2002, which has since then accelerated the pace of water reforms and service provision in Kenya.

Karua remained Justice and Constitutional Affairs Minister in the Cabinet appointed by Kibaki on 8 January 2008, following the controversial December 2007 election.

In an interview with BBC's HARDtalk in January 2008, Karua said, regarding the violent crisis that had developed over the election results, that while the government had anticipated that the opposition Orange Democratic Movement (ODM) of Raila Odinga might be "planning mayhem if they lost", it was surprised by "the magnitude" of it, calling the violence "ethnic cleansing".

Karua headed the government's team in negotiations with the opposition regarding the political dispute that resulted from the election. The political crisis eventually led to the signing of a power-sharing agreement between Kibaki and Odinga.

In the grand coalition Cabinet that was announced on 13 April 2008, Karua remained in her post as Minister of Justice, National Cohesion and Constitutional Affairs.

She was endorsed as the national chairperson of the NARC-Kenya political party on 15 November 2008. There was virtually no competitive election during the party's national delegates' convention at the Bomas of Kenya in Nairobi as all the officials including Ms Karua were being endorsed.

After her endorsement she immediately declared she would be gunning for the highest political seat that being President in the Kenya's 2012 elections.

Karua resigned as Minister of Justice and Constitutional Affairs on 6 April 2009, citing frustrations in discharging her duties. A clear example of her frustrations was when President Mwai Kibaki appointed Judges without her knowledge a few days before her resignation.

She was the first Minister to resign voluntarily since 2003.

Karua contested the 2013 Kenyan presidential election, under the NARC Kenya party ticketShe came in sixth with 43,881 votes in a contested election outcome.

Martha Karua would make a come-back in Kenya's political scene in the 2017 general election seeking for a Gubernatorial Seat in Kirinyaga County.

She lost to the current Governor Anne Waiguru in a heavily contested election after garnering 122, 091 votes against Ms Waiguru's 161,373 votes. Karua contested the election citing election irregularities and filed a petition at the High Court seeking to have Waiguru's election nullified but lost the petition's at the High court, Court of Appeal and ultimately at the Supreme Court.

Karua proceeded to file a petition in the East African Court of Justice suing kenya government for failure of its Judicial arm to dispense justice in the petition.

In December 2015 Karua admitted to receiving a kshs two million "donation" to her presidential campaign costs from British American Tobacco.

Karua said that she thought that the contribution by Paul Hopkins, a BAT employee, was a personal donation. The money was paid via Mary M'Mukindia who was running Karua's campaign.

Karua has the reputation of being untainted by corruption save for this report of donation of alleged tainted money. No culpability has been proven and the British investigations concluded without any charges against Paul Hopkins.

Karua has maintained that she cannot be corrupted and invited Kenyan authorities to investigate any alleged wrong doing.

On 20 September 2021, Senior Counsel Martha Karua was unanimously elected as the Interim Mount Kenya Unity Forum Spokesperson by a section of leaders from Central Kenya. “We have chosen Martha Karua to be our official convener and our spokesperson,” Gatundu South MP Moses Kuria.

Bills to the parliament

Deputy presidential debate to be held on July 19

Nine candidates in the race will face off at a televised debate on Monday.
News
1 month ago
WATCH: The latest videos from the Star
by THE STAR TEAM
News
15 July 2022 - 13:56
Read The E-Paper