The manifesto is divided into three parts, society , economy and environment.

•To create a conducive business environment, especially for Small and Medium Enterprises (SMEs), Igathe promised to do away with multiple business permits if he wins.

•Igathe said his government will institute a 'Linda Jamii’ social protection program aimed at improving and uplifting the sprawling informal settlements in Nairobi. 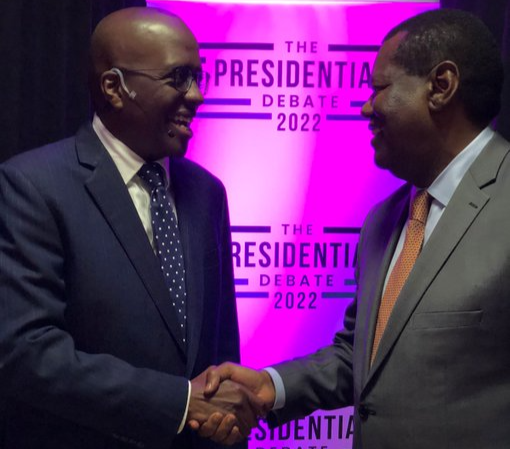 The manifesto dubbed  'The Nairobi Tunavyoitaka Manifesto' according to Igathe was compiled after an intense ground campaign, together with his running mate Phillip Kaloki.

“You said and we listened. 'The Nairobi Tunavyoitaka Manifesto,” Igathe said.

On Wednesday morning, Igathe took his time along Haile Selassie avenue and within the city centre distributing an abridged version of the manifesto.

The governor hopeful had earlier revealed that his manifesto emphasises on eight thematic areas where the private sector needs change on how the capital city is governed including e-government, compliance and enforcement, healthcare, competitiveness, jobs creation, culture and social inclusion.

His manifesto is divided into three focus areas; society, economy and environment.

To fight hunger, Igathe has pledged to put in place a school feeding program for children living in slums and also to enhance bursary programs to improve access to education.

He will establish a 24-hour health facility in every sub county, comprehensively equip health centres and provide ambulances in every ward.

To create a conducive business environment, especially for Small and Medium Enterprises (SMEs), Igathe promises to do away with multiple business permits if he wins.

If elected, the Azimio Nairobi flag bearer said his government will institute a 'Linda Jamii’ social protection program aimed at improving and uplifting the sprawling informal settlements in Nairobi.

In order to decongest the city, Igathe will designate pickup and drop off zones for PSVs throughout the county.

In the first 100 days, the Azimio gubernatorial duo has pledged to create a fit for purpose organisation to deliver the services Nairobi has been deprived of, especially in the informal settlements.

He promised to ensure their cabinet will is made of qualified people who will serve diligently.

He also proposes a five-year score card, pegged on a yearly performance agreement with the public.

Kaloki, who is a former Kibwezi MP, added that the duo will also focus on putting in place proper infrastructural developments for traders to operate in a dignified environment.

The duo have been moving from ward to ward, holding meetings as they seek to woo the voters ahead of elections on August 9.

Igathe said their strategy is about servant leadership which means working for the people.

“We (Kaloki and I) are not interested in politicking but in working as a team as we go on ground to see the state of Nairobi and to ask the people, mwataka nini?" Igathe posed.