Gachagua whisked to safety after rival groups fight in Meru

The rival groups hurled stones at each other.

•Gachagua who has pitched tents in Meru county since Monday was forced to end his campaign in Mutuati, Igembe North, after rival groups started throwing stones at each other.

•What caused the chaotic incident was yet to be established by the time of going to press. 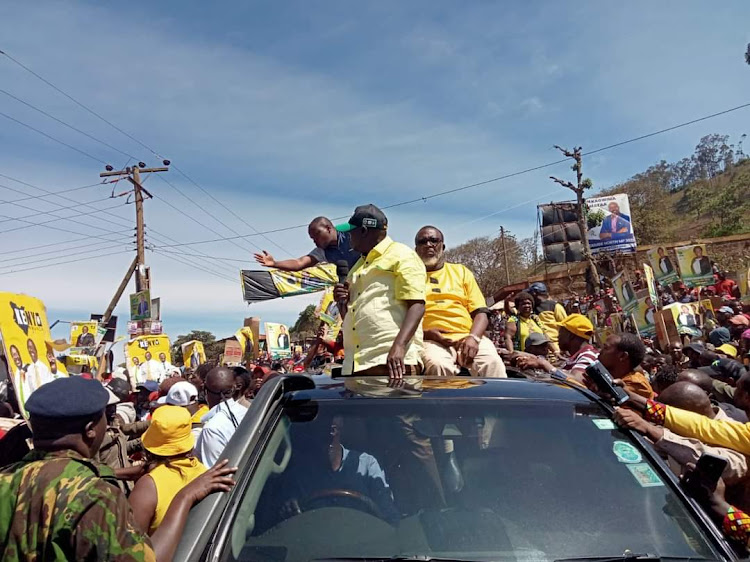 Mathira MP Rigathi Gachagua on Wednesday had a rough time campaigning in Meru county after chaos erupted in one of his rallies.

Gachagua who has pitched tents in the county since Monday was forced to end his campaigns in Mutuati, Igembe North, after rival groups started throwing stones at each other.

While reacting to the incident, Gachagua took to Facebook to condemn the masterminds of the violence.

"Any person who thinks of using our unemployed youths to cause violence is primitive and will be ashamed by the resounding Kenya Kwanza victory in the next 24 days," Gachagua wrote.

Gachagua was flown out of the area in a chopper after he vacated the chaotic scene.

What caused the violent incident was yet to be established by the time of going to press.

Police were forced to hurl teargas to disperse the rowdy groups.

Supporter of ODM candidate Ochillo Ayacko attacked by suspected supporters of Pesa over placement of banner at his premises.
Counties
2 months ago

Before Ali Korane and Nathif Jama spoke, their fans started hurling stones at each other
News - Page 7
3 months ago