Ruto claimed that the Azimio coalition had sensed defeat and was manufacturing opinion polls in attempt to confuse voters.

• Ruto urged the voters not to be threatened by Azimio people, arguing he was the best candidate to take Raila on.

• “Dont compete with  IEBC. You are competing with me and I am ready to take you (Raila) head on," Ruto added. 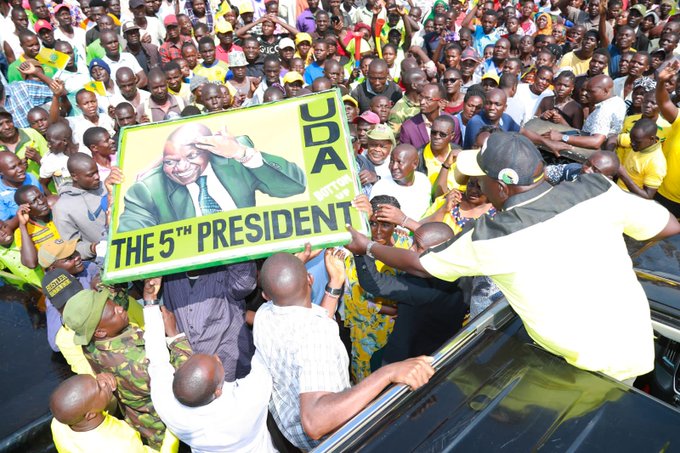 Speaking in Mt Elgon on Tuesday, the DP claimed Azimio Presidential candidate had sensed defeat and started attacking the Independent Electoral and Boundaries Commission (IEBC) in regards to its preparedness for elections.

“Dont compete with  IEBC. You are competing with me and I am ready to take you (Raila) head on," Ruto added.

Raila Odinga, who is Ruto’s main opponent in the presidential race, has reaffirmed his stance that manual voter registers must be used in the August polls.

He said failure to use a manual register alongside the electronic register will be a recipe for vote fraud, while accusing his main competitor Ruto of hatching a plot to rig elections.

Drumming up support for Kenya Kwanza candidates in Mt. Elgon, Ruto urged the voters not to be threatened by Azimio people, arguing he was the best candidate to take Raila on.

"If Raila is not ready for elections, Azimio can get another candidate instead of attacking IEBC. Don't be threatened by Raila. I’m his medicine and I will deal with him on August 9,” he said.

Ruto also claimed that the Azimio coalition had sensed defeat and had doctored opinion polls in an attempt to confuse voters.

On Sunday, the Trends and Insights For Africa (TIFA) released an opinion poll which appeared to show Raila was in the lead.

As per the results of the poll commissioned between June 25 and 30, 2022, Raila enjoyed a 42 percent lead over Ruto who trails with 39 percent.

He argued that when Kenya Kwanza wins the election, Raila will not accept defeat and use opinion polls to cause problems after the polls.

“Stop disturbing us with doctored opinion polls. Kenyans have already decided who they will vote for because Kenya Kwanza has a better manifesto, policies and campaigns,” Ruto added.

While rubbishing the TIFA polls, the DP said Kenyans had already made up their mind of whom they will vote for despite the poll figures for undecided voters.

The DP, however, told his supporters and Kenyans in general to ignore the polls.

He added he has a better plan to revive the economy than Raila.