• "As you are aware, Covid-19 originated in the Wuhan market in China as a result of trade in wildlife products," Mulembani said.

• EROG said the trade will consequently have a ripple effect on other wildlife species. 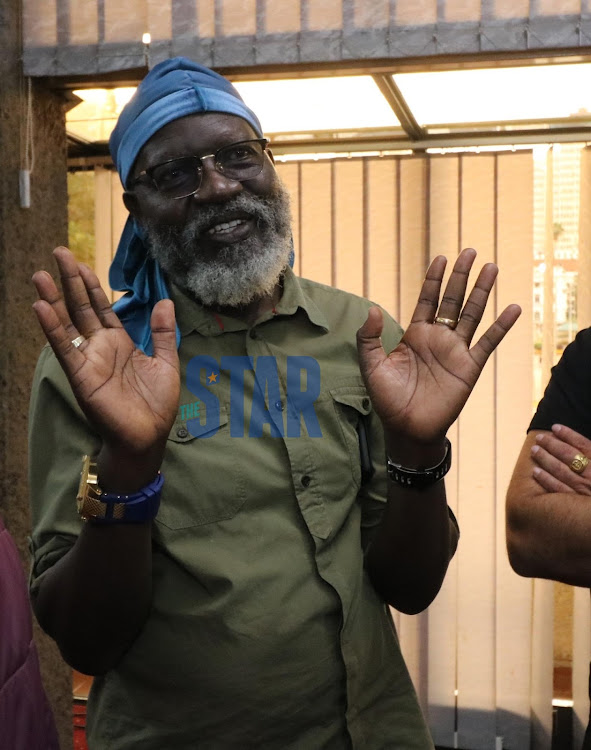 Last Thursday during the launch of the party's manifesto, Wajackoyah said he will export hyena meat to China to boost the country's revenue streams, if elected.

"It is said that a thousand hyenas have got about 2,000 testicles and that a testicle is used for medicinal purposes in China. Its value is about Sh6 million, which is much more than ganja therefore, we will export the testicles," he said.

His remarks have however attracted the wrath of NGOs in the conservation sector.

Environmental Rights Organisation on Thursday issued a statement saying glorifying the trade in hyena testicles and snakes is retrogressive and has historically harmed the country.

The organisation said the trade must not be hyped by a presidential candidate.

“We express our strongest displeasure and disappointment at the speech made by Wajackoyah during his presidential manifesto launch and campaign rallies.

"He continues to peddle rhetoric targeting wildlife and endangering them by commodifying them. Wajackoyah’s blatant ignorance of the magnitude of his utterances and its impact on our wildlife assets is despicable,” they said.

The group said Wajackoyah is making it obvious that he is not committed to protecting nature, at such a critical time of triple planetary crisis where world leaders are committing to environmental protection.

Part (xi) of the Act states that: No person shall trade in, import, export, re-export or introduce any specimen or product of a wildlife species into or from Kenya, without permit issued by service under this act.

Kenya is also a treaty member to the Washington Convention on International Trade in Endangered Species of Wild Fauna and Flora, a global agreement among governments to regulate or ban international trade in species under threat.

“Trade in snakes and hyena testicles are life-threatening to the species, as poaching will be on the rise due to the anticipated high demand in the wildlife products,” the organisation said.

It also said the trade will consequently have a ripple effect on other wildlife species.

“Should Wajackoyah’s proposal be legalised under his government, it will be a huge setback to the milestones achieved in the management of illegal wildlife trade and poaching over the years by Kenya.”

Moreover, the group said, this will interfere with the ecosystem of the wildlife species and their food chain and the ripple effect might lead to unprecedented calamity.

The EROG network urged Wajackoyah to engage with professionals and CSOs in environment and wildlife conservation to be rightfully guided before coming up with contradictory even ludicrous proposals, that puts the existence of wildlife species in jeopardy.

Similar concerns have also been raised by Union of Veterinary Practitioners –Kenya who said the move would be a recipe for disaster.

The union through its secretary general Miheso Mulembani said Wajackoyah’s proposal is impractical, cannot be implemented and may jeopardise the existence of our wildlife.

He said trading in wildlife will see a spike in zoonotic diseases owing to the spill of viruses, bacteria and parasites from hyenas and snakes to human beings.

"As you are aware, Covid-19 originated in the Wuhan market in China as a result of trade in wildlife products.

"Kenya should be prepared for a surge in zoonotic diseases such as rabies, brucellosis and leptospirosis should trade in hyena products be legalised under Wajackoyah's government," he said.

Mulembani said Kenya is a treaty member of the CITES, which covers export, re-export, import and landing from high seas of live and dead animals, their parts, and derivatives.

“Trade in hyenas and snakes is disallowed and a threat to the existence of the wild species,” he said.

The official urged Wajackoyah to consult closely with veterinary professionals before making such proposals.

Zoonotic diseases are transmitted between animals and humans.

Scientists say 75 per cent of all emerging infectious diseases have come from wildlife.

And while the science is not yet conclusive as to the origin, it seems likely that Covid-19 originated from human-wildlife transmission and has since spread to nearly all countries globally.

The Middle East Respiratory Syndrome was transmitted from camels to humans in 2012 and viruses ranging from avian flu to ebola have their sources in wildlife -human transmission.

UNEP says more cases of zoonotic diseases are expected to occur as more and more people encroach and shrink remaining natural areas and as the process of urbanisation moves us ever closer to wildlife.

Scientists call it recipe for disaster, say 75 per cent of all emerging infectious diseases come from wildlife.
News
4 months ago

The Roots Presidential candidate said he will sign an executive order to compensate them Sh 1 million.
News
4 months ago

Why Kenyans should change mindset on bhang - Wajackoyah