City residents said they won't vote if food prices are not lowered.

• The protesters called on the government to lower food and basic commodity prices as a precondition for them to participate in the forthcoming general election.

• The price of food and basic consumer goods has in recent months been on an upward trajectory with the cost of some basic items hitting unprecedented highs. 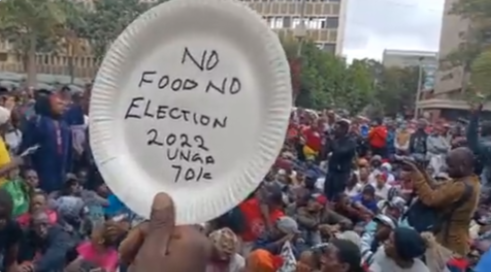 Kenyans converged at the CBD in Nairobi to demonstrate against the high cost of living.
Image: SCREEN GRAB

Kenyans on Thursday converged in Nairobi's Central Business District to protest over rising cost of living that continues to push families on the edge.

The placard-waving protesters called on the government to lower food and basic commodity prices as a precondition for them to participate in the forthcoming general election.

"Hakuna kura bila kula (There is no election without eating)," they shouted as they staged the protest outside Harambee House.

The price of food and basic consumer goods has in recent months been on an upward trajectory with the cost of some basic items hitting unprecedented highs.

The protesters called for reduction of the price of 2kg maize flour to Sh70 from the current average price of Sh209 in major supermarkets.

A survey released on Wednesday by Infotrak research firm indicated that 73 per cent of Nairobi residents feel that the country is headed in the wrong direction.

Majority of those who held this opinion (81%) cited the high cost of living as the reason behind their assertion.

Kenya's cost of living accelerated further in May due to high food and fuel prices hitting 7 .1 per cent from 6.47 in April and 5.556 percent in March.

Data by the Kenya National Bureau of Statistics (KNBS) Consumer Price Index and Inflation showed that the rise was mainly driven by an increase in prices of commodities under food and non-alcoholic beverages basket (12.4 per cent).

This was mainly attributed to increase in prices of petrol and diesel that rose by 3.8 per cent and 4.4 per cent, respectively.

During his Labour Day speech on May 1, 2022, President Uhuru Kenyatta told off those who were criticising him over the rising cost of living and blamed the situation on the Russia-Ukraine war.

On June 9, the Consumer Federation of Kenya (Cofek) called on the Competition Authority of Kenya (CAK) to “restore order in the retail sector” saying Manufacturers and Retailers were taking advantage of the impending general elections, inflation and the Russian-Ukraine war to exploit consumers.

"Abuse of buyer power between manufacturers and supermarkets is hurting both consumers and consumers alike. Retail chains are varying prices at will and in an exorbitant manner," secretary general Stephen Mutoro said.

The association said the prices are subject to prevailing costs of raw materials, transport and logistics among other factors that affect the cost of production.

They cited external shocks occasioned by Covid-19, the Russian - Ukraine crisis and a weakening shilling against major international currencies.

The federation has threatened to call for consumer boycott of outlets involved.
News
2 months ago