Kenya joined the Clean Seas campaign in 2017 after instituting a ban on plastic carrier bags on February 27, 2017.

•The Clean Seas Campaign is part of UNEP's broader work on marine litter and plastic pollution which contributes to the goals of the Global Partnership on Marine Litter.

•The initiative is a voluntary open-ended partnership for international agencies, governments, businesses, academia, local authorities and non-governmental organizations to cooperate and develop methods of tackling marine litter and plastic pollution. 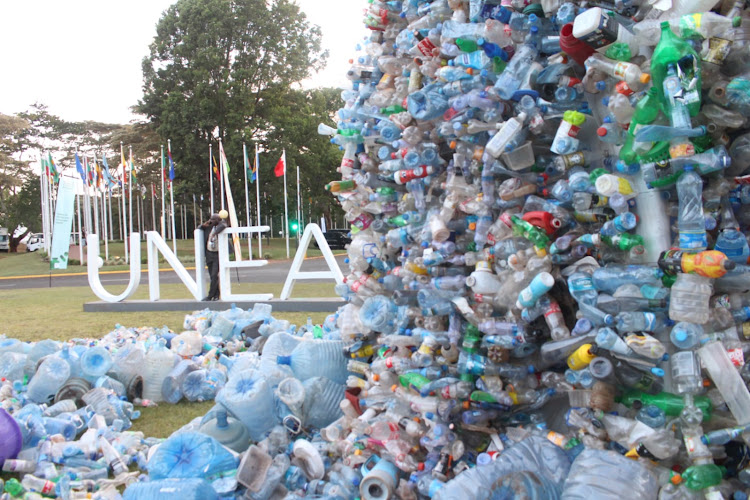 UNEA signpost near a plastic art installation on the day representatives from 175 nations endorsed a resolution to end plastic pollution and forge an international legally binding agreement by 2024 at the UNEA-5, Gigiri, Nairobi on March 2, 2022 Image: /ANDREW KASUKU.

Efforts to end plastic pollution have received a serious boost after the United States of America and the European Commission officially joined the Clean Seas Campaign.

The Clean Seas Campaign, part of UNEP's broader work on tackling marine litter and plastic pollution, shows that 80 per cent of plastics that find their fate in the ocean come from land-based sources.

At least 11 million tons of plastic are discarded into our seas annually - an amount that is projected to nearly triple by 2040 without urgent, large-scale action.

“Their leadership and commitment to the values and mission of Clean Seas will be paramount in accompanying the Intergovernmental Negotiating Committee process and developing a globally binding treaty to end plastic pollution. Our success is part and parcel to the ongoing work of our Clean Seas members and partners,” she said.

According to experts, humans have produced more than 8.3 billion tonnes of plastic since the 1950s and only around 9 per cent has been recycled.

By joining the campaign, the US and EU are demonstrating their commitment to ending global plastic pollution.

Kenya joined the Clean Seas campaign in 2017 after instituting a ban on plastic carrier bags on February 27, 2017.

The ban came into effect in August 2017.

Before 2017, about 100 million plastic bags were used in Kenyan supermarkets every year, with severe consequences for the environment.

The Clean Seas Campaign has been broadening its scope and entering a new strategic phase that will see it work with the political process, tasked with the implementation of United Nations Environment Assembly resolution 5.14 on ending plastic pollution.

On March 2, heads of state, environment ministers and other representatives from 175 nations, endorsed a historic resolution to end plastic pollution, and pledged to forge an international legally binding agreement, by the end of 2024.

The resolution, based on three initial draft resolutions from various nations, establishes an Intergovernmental Negotiating Committee (INC) which will begin its work this year, aiming to complete drafting of a  legally binding agreement by the end of 2024.

That in turn, is expected to produce a legally binding instrument, which would reflect diverse alternatives to address the full lifecycle of plastics. It is expected to include the design of reusable and recyclable products and materials, as well as the need for enhanced international collaboration to facilitate access to technology allowing this revolutionary plan to be realized.

Some of the elements that will be considered in developing the new treaty include: global objectives to tackle plastic pollution in marine and other environments, the impacts and global obligations surrounding the full lifecycle of plastics and consumption and waste management.

Other elements include a mechanism for providing policy-relevant scientific information and guidance, a centre for providing financial support to the treaty implementation underpinned by national and international cooperative measures.

The treaty will hold nations, businesses, and society accountable in the fight to eliminate plastic pollution from our environments.

The legally binding instrument on plastic was among a series of draft resolutions on biodiversity and health, green economy, and circularity aimed at tackling climate change more widely.

Solutions to focus on conserving and sustainably using the oceans, seas and marine resources
News
5 months ago

He pointed out that more than eight million tons of plastics are thrown into oceans each year.
News
5 months ago

What next after adoption of legally binding agreement on plastics?

The designers make clothes and bags, which they sell online at Sh3,500 and above.
News
7 months ago
WATCH: The latest news from across Africa
Post a comment
WATCH: The latest videos from the Star
by GILBERT KOECH News Reporter
News
06 July 2022 - 15:16
Read The E-Paper