Raila under fire as Ruto launches attack over Covid funds

Ruto made the allegations during his campaign rally in Marsabit on Wednesday.

•Ruto said the governors moving around with Odinga were funding his presidential campaigns having been promised state protection against being investigated.

•This, he argued is happening at a time IMF has said Sh65 billion Covid-19 got lost in the Handshake government and another Sh10 billion which the Auditor General has flagged as unaccounted. 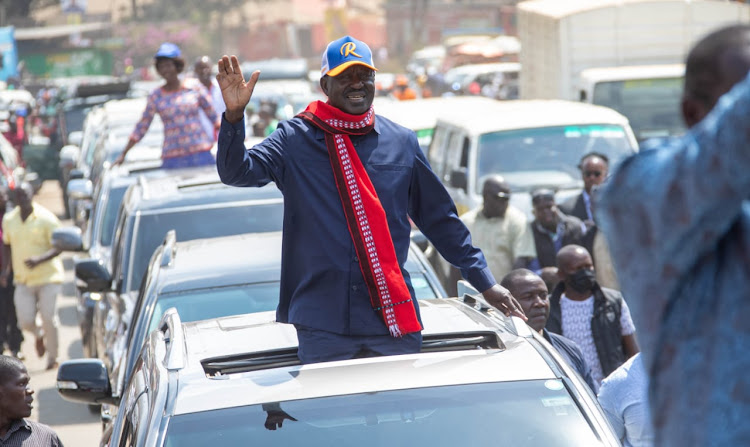 Ruto said the governors moving around with Odinga were funding his presidential campaigns having been promised state protection against being investigated.

This translates to mean (Stop talking about corruption because you are the most corrupt person, you are protecting the governors who have stolen public money; they are coming to you so that they share with you the stolen money).

This, he argued is happening at a time IMF has said that Sh65 billion Covid-19 got lost.

Another Sh10 billion was flagged by the Auditor General.

He said it was unwise for the ODM leader to talk about corruption and the fight in the country when he is condoning individuals known to be thieves.

"Wewe wacha kuongea maneno ya corruption, you have no business giving us lectures about corruption when you are dining with Covid-19 billionaires. You cannot be preaching water and taking wine,” he stated.

Interior cabinet secretary Fred Matiangi also came under fire over the runaway insecurity in the country.

Ruto accused the CS of abdicating his roles and instead focusing on politics.

He was speaking Sololo in Marsabit during his tour of the region.

He said it was unfortunate that hundreds of lives continued to be lost in the hands of gangs and other militia with no definite action being taken to arrest the situation.

"Here, Marsabit many people have lost their lives and it is so shameful because those tasked with the mandate of ensuring there is security in our country are busy doing politics," said Ruto.

(Those cabinet secretaries are useless people, they are moving around the country politicking as people lose their lives here then later come here and do public relations exercises).

Promising to restore order if elected, the Kenya Kwanza leader said his administration is going to deploy adequate security officers to the region including other war-prone areas so that the locals can live in peace just like the rest of Kenyans.

"You are entitled to security like Kenyans in other parts of the country, security matters is not a favour that someone must provide it is a right," he noted.

In an indirect reference to Matiangi and state officers in charge of the interior docket, Ruto accused them of misusing the officers to disrupt political rallies of perceived opponents.

(We are going to stop the habit of deploying thousands of police officers to public rallies and bring them here to ensure their lives and properties are protected).

The government has imposed a 12-hour night curfew in the area in a bid to recover more than 3,000 firearms held illegally.

Matiangi who recently visited the county maintained that the operation rejesha amani Marsabit would continue until all the firearms are recovered.

The Deputy President at the same time warned that leaders from the region instigating the fights among civilians that his administration was going to deal with them firmly.

He said they cannot afford to continue losing lives through such avoidable acts.

During his campaign tour of the region, the deputy head of state was accompanied by Garissa Township MP Adan Duale and several other legislators.

Allow me to deal with Raila, Ruto tells Uhuru