Waiguru asserted that Kirinyaga is a UDA stronghold.

• Waiguru said that leaders "disguising as independent candidates" should not shy away from declaring the party they support.

•Waiguru asserted that Kirinyaga is a UDA stronghold and appealed to the county residents to stand with the UDA brigade from MCA to President. 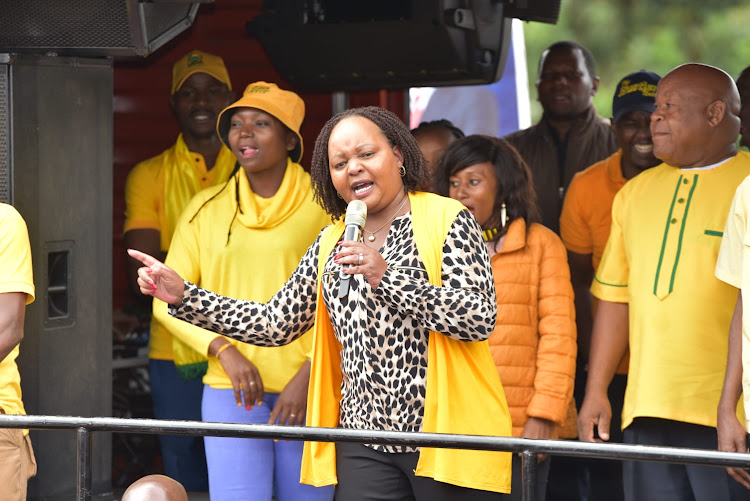 Kirinyaga County Governor Anne Waiguru has claimed that her opponent Wangui Ngirici, who is vying as an independent gubernatorial candidate, is secretly in the Azimio coalition.

The governor said that the remarks made by Jubilee Party Vice Chairperson David Murathe that the coalition has two candidates in Kirinyaga namely Ngirici and Senator Charles Kibiru are a clear indication that the leader is in ODM leader Raila Odinga's political outfit.

She added that the two candidates were being sponsored by the state.

Speaking during a public rally in Karaini village in Kirinyaga Central on Monday, Waiguru said that leaders "disguising as independent candidates" should not shy away from declaring the party they support.

She at the same time argued that governments are formed by political parties and an independent Governor would have a hard time pushing for National Government projects in the county.

Waiguru asserted that Kirinyaga was a UDA stronghold and appealed to the county residents to stand with the UDA brigade from MCA to President.

She pointed out that anyone who has nothing to show for the time they have been in office should not be re-elected, saying that as a governor, her development record for the past five years speaks for itself.

While addressing residents of Gathigiri in Mwea afterwards, Waiguru said that the UDA manifesto would address the challenges that rice farmers have been experiencing including the issue of rice importation and provision of subsidized fertilizers.

The Governor also castigated opponents who have been using propaganda and insults to discredit her development record saying they should instead sell their agenda and show what they have done for the residents.

She called upon to all registered voters to rise up very early on the voting day to go and exercise their democratic right of electing their leaders.

With just over 30 days to the elections, Governor Waiguru has intensified her grassroots campaigns in a bid to convince the electorate to give her another term which she said will enable her to complete the massive development projects which she has been implementing.

Some of the projects she enumerated include Wezesha Kirinyaga's economic empowerment program through which she has been funding farmers to undertake various agricultural projects to enable them to increase their incomes.

In the health sector, the governor has undertaken infrastructural and service delivery reforms including the construction of the Kerugoya Level Five Hospital complex, about 20 dispensaries projects and the construction of additional wards in various hospitals across the county.

In urban development, the county’s main towns have undergone a major facelift through the construction of cabro car parks and pavements covering more than 50,000 square meters.

The governor was accompanied by her running mate David Githanda and other UDA aspirants in the county.

Besides the thermogum and N95 masks, the county procured 11 other items at highly inflated prices.
Counties
1 month ago

Where are they? Bigwigs battle for their political lives

Exodus to defend their backyards has forced Raila, Ruto to find substitutes
Siasa
1 month ago
WATCH: The latest videos from the Star
by THE STAR REPORTER
News
05 July 2022 - 21:13