Karua's tour comes at a time when there are jitters within the Azimio's Nairobi camp over zoning.

•They will then proceed to Kawangware and Rituta wards before stopping over at  Marikiti in the Starehe sub-county. 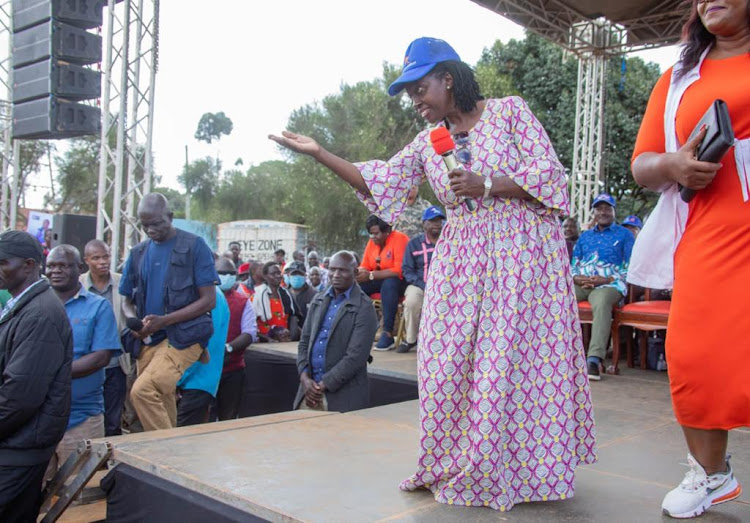 Narc-Kenya leader Martha Karua will for the first time lead Azimio La Umoja Coalition on a campaign tour of Nairobi.

Karua who is Azimio La Umoja Coalition presidential candidate Raila Odinga‘s running mate will start her campaigns at Kihumbini grounds, Kangemi after attending a church service at Westland’s ADC church at 10:00 am.

Together with the Nairobi Azimio team, they will then proceed to Kawangware and Rituta wards before stopping over at  Marikiti in the Starehe sub-county.

In Kamumunji, the Azimio team will be at Gikomba and Burma and Masimba to drum up support for the Azimio coalition.

Led by Westlands MP Tim Wanyonyi and Gender CAS Rachel Shebesh, the team are in charge of ‘selling’ the manifesto of Azimio's presidential hopeful Raila.

The team of 16 include aspirants defending their seats, newcomers and those who missed out in ODM and Jubilee primaries.

Karua's tour comes at a time when there are jitters within the Azimio Nairobi camp over zoning.

The Coalition announced it had adopted a rationalisation plan that compels constituent parties to harmonise candidates to tame increased sibling rivalries.

However, those targeted have refused to step aside as they claim Azimio la Umoja presidential candidate has not told them directly to drop their ambitions.