Gachagua was addressing congregants of a Catholic church in Meru county.

•Gachagua used the better part of his speech to disparage Narc Kenya leader Martha Karua for attacking the DP.

•It is when attacking the Azimio presidential running mate that he uttered the unprintable word. 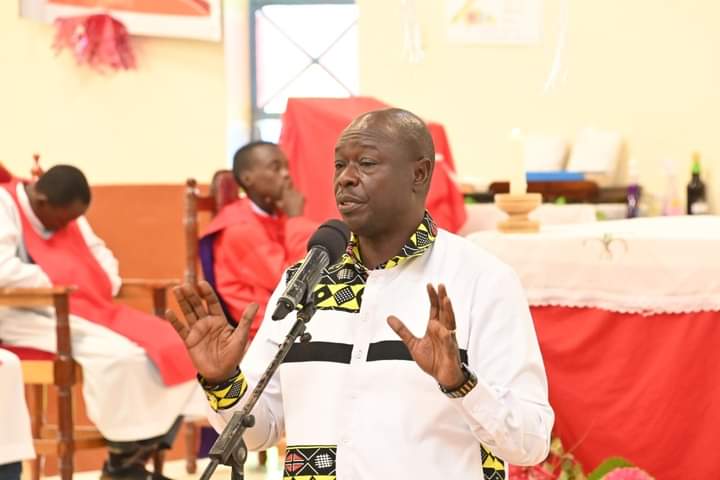 Kenya Kwanza's presidential running mate Rigathi Gachagua is yet again at the centre of another storm after he used an unprintable word during a church service.

During the church service in Meru county on Sunday, Gachagua used the better part of his speech to disparage Narc Kenya leader Martha Karua for attacking DP William Ruto.

Karua on Saturday took a swipe at the DP after reports emerged that he is planning to probe Uhuru once he wins the presidency.

"Any leader who threatens an individual be it the president or any other person is not worth being elected as a leader," Karua said.

It is when responding to Karua's attack that  Gachugua uttered the unprintable word.

"When Mwai Kibaki got in trouble with Raila Odinga, Martha Karua walked out on Mwai Kibaki. She showed him the M... finger na akatoka kwa serikali," he said.

Here are reactions from a section of Kenyans:

Gachagua has uttered obscenities at the altar during a church service. Luckily, the presiding priest and congregants didn't have a problem with what the fore DO was saying.

This man RIGATHI GACHAGUA wueh!! Gachagua has used the phrase ...at the altar of a church today. Si hata mkuwe na heshima tu kidogo kwa madhabahu aaaiii!!! Now, which agenda is this and how will badmouth Raila and Karua help wananchi?

Karua labelled the DP as unfit for the presidency.
News
1 month ago

Ruto: I am running more against Uhuru, not Raila

"From where I seat, I am running more against my boss than his candidate."
News
1 month ago
WATCH: The latest videos from the Star
by SHARON MWENDE
News
03 July 2022 - 17:02