• Odede urged the Office of the Director of Public Prosecutions to take urgent action to enforce the Election Offences Act as there have been gross violations by politicians.

• She said they will soon release a report on the misuse of public resources during the political parties' nominations. 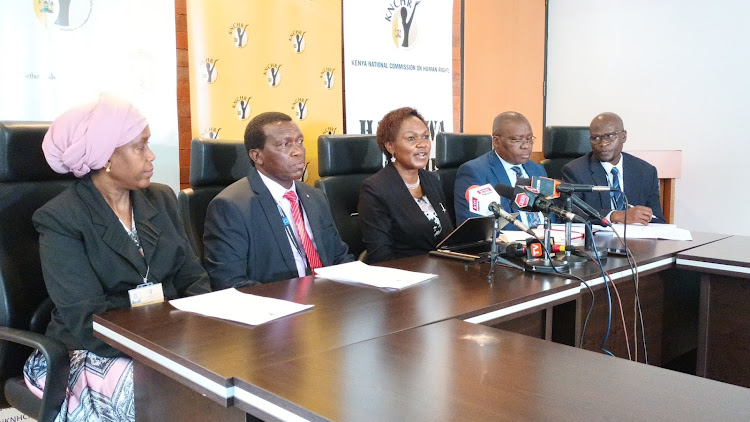 A human rights group has raised concerns over the state of insecurity, just over a month to the general elections.

Kenya National Commission on Human Rights chairperson Roseline Odede said they have been closely monitoring the situation ahead of the polls.

Odede urged the Office of the Director of Public Prosecutions to take urgent action to enforce the Election Offences Act as there have been gross violations by politicians.

"The commission has documented 47 cases of misuse of public resources by aspirants and candidates during campaigns, thus giving them undue advantage over others," she said.

The resources, Odede said, include government-registered vehicles and public-funded programmes such as the Women Empowerment Fund and the Constituency Development Fund.

She said they will soon release a report on the misuse of public resources during the political parties' nominations.

These were distributed as money during campaigns, camouflaged relief food, branded merchandise and giveaways.

Odede said they have also received reports of harassment and intimidation of female aspirants online and offline-during parties' nominations and the current campaign period.

"We also observed and documented the disruption of learning activities that has allowed students in primary and secondary schools to participate in political events such as singing for politicians and moving out of schools to cheer politicians," she said.

She said loud campaign vehicles are a distraction when they pass near schools during class time.

Odede said children are exposed to danger when engaged in political activities.

The commission has documented 101 such cases, with the highest prevalence recorded in Nairobi, Kiambu, Kilifi, Mombasa, and Nyamira.

She said the commission was working closely with the Ministry of Education and IEBC to make sure children's rights are not violated.

Odede asked the IEBC to inspire public confidence through continuous updates on its preparedness as the August election draws near.

"We ask IEBC to step up voter education so that members of the public can meaningfully engage in the electoral processes," she said.

Odede said the security situation in various counties is causing fear and apprehension among Kenyans and it could affect their constitutional right to vote if not resolved soon.

"The commission has documented the issue of insecurity in various parts of the country including Lamu, Garissa, Marsabit, Baringo, Elgeyo Marakwet, Mandera, Turkana, West Pokot, and recently Nakuru," she said.

A fact-finding mission by the commission in the counties along the Kerio Valley belt in the Rift Valley found that there is an ongoing displacement and involuntary movement of persons out of the affected areas.

It is yet to be established if these killings are linked to the political campaigns.

"Despite the findings on security, the commission commends the Ministry of Interior and the Inspector General for their swift action in curbing instances of insecurity across the country," she said.

She said the commission has recorded 24 cases of violence, out of which 20 were perpetrated during political parties' nominations and four during the current political campaigns.

"Three cases of killings have been documented in Nairobi, Kisii, and Baringo counties suspected to have been perpetrated in the context of elections," she said.

She said in Nairobi, a man was allegedly killed by civilians in Mathare North Area as he distributed campaign materials in February 2022.

In April, an aspirant for the MCA seat was attacked in his home by unknown assailants in Bombaba, Kisii county.

In May, there was a banditry attack on the border of Marakwet and Baringo East resulting in the death of a primary school teacher.

Women urged to lead peace campaigns ahead of polls