He said the manifesto missed conspicuous issues facing the nation which is corruption.

• Raila claimed Ruto has been implicated in many economic crimes and acts of corruption.

• Raila said there will be zero tolerance for corruption under Azimio and those culpable will be held accountable to the fullest extent of the law without any exceptions. 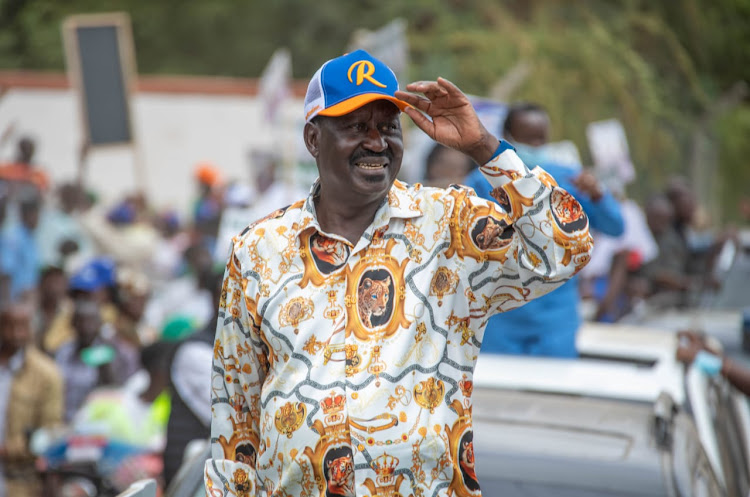 Raila Odinga-led Azimio coalition on Friday tore into the Kenya Kwanza manifesto that was launched on Thursday.

DP William Ruto pledged to give billions to 'hustlers' in an ambitious manifesto launched at Kasarani Stadium in Nairobi.

But in a statement on Friday, Raila said the manifesto was punctuated by empty promises, slogans and handshakes.

According to the Raila coalition,  the manifesto missed conspicuous issues facing the nation which is corruption.

Raila claimed Ruto has been implicated in many economic crimes and acts of corruption.

"It is no wonder Ruto and Kenya Kwanza have no agenda or plan to address corruption, the number one impediment to the development of our country. Nothing will ever go forward in this country, without slaying the dragon of corruption."

"This is why our Azimio coalition has explicitly stated and publicly committed to bringing to an end the evil of corruption upon taking office. That is the only way through which Kenya will realise its full potential."

Raila said there will be zero tolerance for corruption under Azimio and those culpable will be held accountable to the fullest extent of the law without any exceptions.

"There will be no room at all for any corrupt individual in the Azimio government. This vice is the biggest threat to Kenya and we are determined to stamp it out, unlike our opponents who do not even dare to utter the word," Raila said.

DP Ruto said on Thursday his manifesto was the most realistic model to end Kenya's economic crisis.

His economic blueprint emphasises empowering the economically underprivileged through what he calls the bottom-up economic model.

Ruto: My seven-point commitment to Kenyans if elected

Ruto said he will focus on the ‘people’ to turn around the Kenyan economy.
News
5 months ago

We'll not have dam projects under Kenya Kwanza - Ruto

He says focus will shift to community water projects, harvesting and recycling.
News
5 months ago