We'll not have dam projects under Kenya Kwanza - Ruto

The alliance says it'll shift to community water projects, with emphasis on harvesting and recycling.

• The alliance has in its manifesto highlighted water as a key enabler of agriculture but termed dam projects as lacking value for money.

• The coalition states that it will seek to achieve the right to water by 2027 through community water projects, with emphasis on harvesting and recycling. 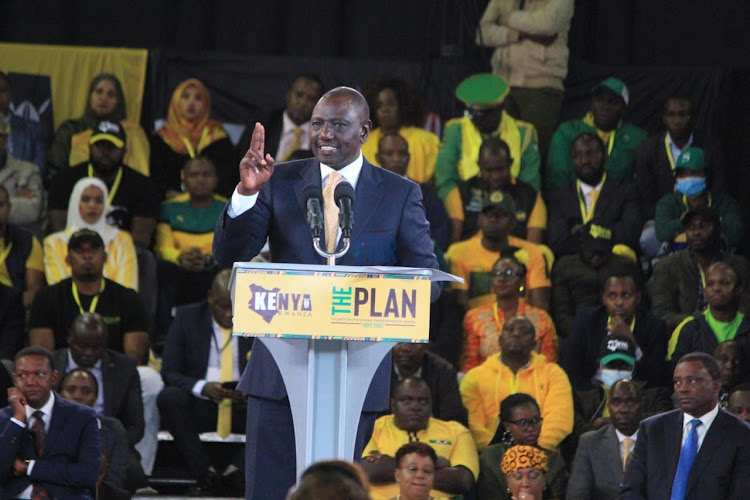 There will be no dam projects under the Kenya Kwanza administration should the outfit win the August 9 general election.

The alliance has in its manifesto highlighted water as a key enabler and irrigation as single most important game changer in agriculture but termed dam projects as lacking value for money.

"Two-thirds of Kenya’s agricultural land requires irrigation, against only 4 per cent that is irrigated. Current policy is centered on domestic use and large dams," the manifesto reads in part.

The coalition states that it will seek to achieve the right to water by 2027.

This is the access to sufficient, safe, acceptable, physically accessible and affordable water for personal and domestic use.

"This will be done by shifting focus from large dams to household and community water projects, with emphasis on harvesting and recycling," the manifesto states.

This revelation came to light Friday night during the launch of the Kenya Kwanza manifesto at the Kasarani Stadium, Nairobi.

The launch was presided over by UDA presidential candidate, Deputy President William Ruto.

The DP said in areas where large water reservoirs are viable, his administration will adopt the public-private partnership (PPP) to fund the projects using IPP model.

He said using the PPP model on the Turkana aquifers has the potential to irrigate one million acres of land.

Under the Jubilee government in which Ruto serves as the second in command, the administration signed deals valued at more than Sh700 billion for construction of over 60 dams in various parts of the country.

The projects' main aim was to boost food security through large-scale irrigation.

The dams include Thwake in Makueni/Kitui, Karimenu in Gatundu, Thiba in Kirinyaga, Mwache in Kwale, Soin-Koru in Kano plains and the controversial  Arror and Kimwarer dams in West Pokot county.

Project expected to end perennial flooding that has caused loss of lives, property in the Kano plains for decades
Counties
1 month ago

President will personally launch its operationalisation as it is now ready for use
Counties
2 months ago
WATCH: The latest videos from the Star
by EMMANUEL WANJALA Radio, Print & Digital Reporter
News
30 June 2022 - 20:09