Chaos were occasioned by supremacy battle between Ongwae and MP Arati.

•The chaotic incident was occasioned by a supremacy battle between Kisii Governor James Ongwae and Dagoretti MP Simba Arati,

•One person was reportedly injured in the head in the ensuing battles. 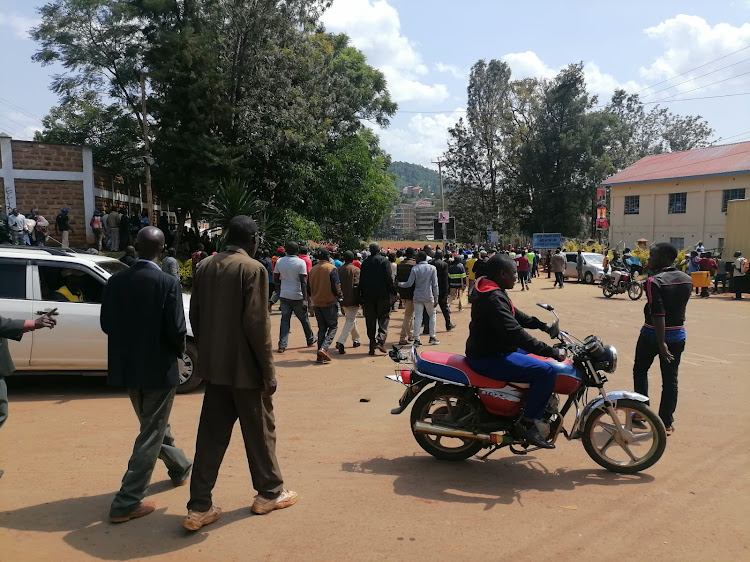 Hundreds of Pro Arati supported throng to Gusii Stadium after they were addressed at Capital Round About in central Kisii on Thursday, June 30th, 2022 (PHOTO BY MAGATI OBEBO)

The chaotic incident was occasioned by a supremacy battle between Kisii Governor James Ongwae and Dagoretti MP Simba Arati.

One person was reportedly injured in the head in the ensuing battles.

The youth was injured as they clashed with police officers at the entrance to Gusii Stadium, the venue for the rally where Karua and Ida were due to meet women.

The gate to the stadium was partially destroyed as pro-Arati supporters attempted to force their way in before they were repulsed by police.

Kitutu Chache South MP Richard Onyonka who is seeking the Senate seat under the ODM ticket had to lead the youth to the Capital round in the Centre of the County capital where, he together with gubernatorial candidate Simba Arati, addressed them.

The youth, in hundreds, were to later storm into the stadium overwhelming the detachment of officers manning the gate.

This time, they did not fight back making the all-women event for both genders.

Early, Kisii County Governor James Ongwae who had warned Arati, not to set foot at the function, welcomed Ida and Karua at Sports Club before taking them to the Gender Recovery Centre at Daraja Moja which they inaugurated.

Though unwelcome, Arati, made his way to the County capital and his team where he and his team addressed his supporters before ' giving them permission to re-enter the stadium' where they had early been chased from.

At the Gender Recovery Centre, Ida and Karua condemned the spiralling cases of violence against women in the country.

They both called on both genders to tame their anger to stem the escalation of gender-related violence cases at home.

"It is traumatizing witnessing the aftermath of violence in Kenyan homes. We should have conversations aimed at ending the scourge," said Ida.

Karua said violence at home was a result disorder that needs to be treated.

"Some cases are a result of mental disorders which need to be treated. We believe such centres as this can play a big role in attending to vulnerable incidents, the same we have seen today," she said.

County Woman Rep Janet Ongera said GBV cases in Kisii had been on the rise.

Kisii, she said, is still third in the ranking, adding that the Gender Recovery will boost th3 efforts by her office to fight the scourge.

The function was attended by among others Rachel Shebesh and Gladys Wanga.

The Centre located in Daraja Moja has been funded by the office of the Woman Rep, Janet Ongera, office.

The report to have them indicted was filed at Kisii Central Police station.
Counties
1 month ago

Azimio leaders are on a five-day vote hunt in Nyanza counties.
News
1 month ago
WATCH: The latest videos from the Star
by MAGATI OBEBO @magatinews
News
30 June 2022 - 15:35