• The subject has topped campaign rallies as aspirants intensify vote-hunting ahead of the August 9 polls.

• Front runners, Raila Odinga of the Azimio la Umoja Coalition and his main opponent William Ruto of Kenya Kwanza have made the fight  against corruption a key selling point as they traverse the country in search of votes. 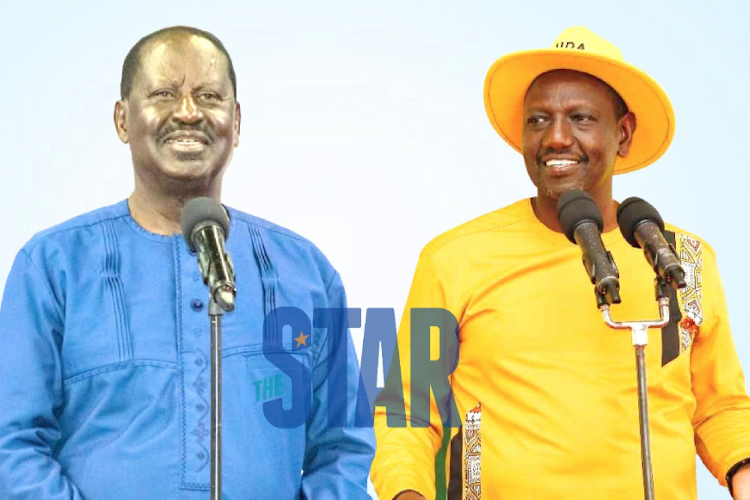 Corruption, an insidious plague with wide-ranging corrosive effects on society has seen presidential candidates pledge to tackle the vice with unrivaled gusto if elected.

The subject has topped campaign rallies as aspirants intensify vote-hunting ahead of the August 9 polls.

Front runners, Raila Odinga of the Azimio la Umoja Coalition and his main opponent William Ruto of Kenya Kwanza have made the fight  against corruption a key selling point as they traverse the country in search of votes.

They have all outlined various tactics they intend to employ to end the vice which President Uhuru Kenyatta claimed costs the country Sh2 billion daily.

Ruto has cited politics as the biggest obstacle hindering the anti-graft war and said the vice should be dealt with from a level-playing ground so that everyone, including the President, can be held accountable.

The DP says the war on corruption has been counterproductive because it has been politicised as individuals from only one side of the political divide have been targeted in the purge.

“We must not personalise or politicise corruption. We must deal with it from an institutional space so that everyone including the president is held to account,”Ruto stated.

If elected as Kenya’s fifth president, the Deputy President said he would allow the Ethics and Anti-Corruption Commission (EACC), Inspector General of Police, Judiciary and the Directorate of Criminal Investigations (DCI) to operate independently devoid of State interference.

The DP also said the Judiciary will be empowered under the Kenya Kwanza administration to fully execute its mandate.

He said that while the Judiciary is expected to take lead in fighting graft, it has been crippled through budgetary cuts.

“The war on corruption is a lost course, it has metamorphosed to a personal war and State organs mandated to fight the vice have been weakened,” Ruto stated.

His Azimio counterpart Raila has meanwhile demonstrated faith in his running mate Martha Karua who he says will take charge of the fight against corruption.

The two leaders have cited their impressive track records in anti-graft advocacy to demonstrate to the electorate that they are the safest pair of hands capable of slaying the dragon that is corruption.

They have accused the DP on the other side of the periphery of tolerating  corruption, citing his running mate Rigathi Gachagua who has active corruption cases before court as an example.

“The Azimio government that we will form will straighten the country. I have already selected our Deputy President Martha Karua who will be in charge of Justice and Constitutional Affairs. She will deal with all the corrupt leaders,” Raila said when unveiling the former Gichugu MP as his running mate on May 16, 2022.

If elected, Raila said his administration will prioritise the anti-corruption war alongside the implementation of economic transformation programs.

"Azimio government wants to face this dragon called corruption head-on to ensure that we can be able to do our things in a clean and fair manner. Kenya has great potential,” Raila stated.

The ODM leader said this will entail sealing all loopholes used as avenues to siphon public funds and pump the secured funds into economic projects meant to spur the country's growth.

Raila said the loopholes cost the country in excess of Sh700 billion annually.

“That figure has been confirmed by World Bank reports. Even former US President Barack Obama raised concerns about corruption in the country at some point,” Raila said.

Beside the above measure, he said he will also push for legal amendments to enable speedy resolution of corruption cases saying lengthy court processes have been an Achilles’ heel in the fight against corruption.

Official records show that there are 469 corruption cases seeking to recover assets worth about Sh11.4 billion and most relate to recovery of public land.

Promises to fight corruption to ensure public resources benefit all Kenyans and not a few individuals
Counties
3 months ago
WATCH: The latest videos from the Star

Promises to fight corruption to ensure public resources benefit all Kenyans and not a few individuals
Counties
3 months ago
Post a comment
WATCH: The latest videos from the Star
by MAUREEN KINYANJUI News Reporter
News
28 June 2022 - 18:21
Read The E-Paper